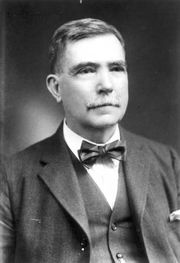 Eugene Flynn Enslen Sr (born February 11, 1858 in Wetumpka, Elmore County; died July 30, 1941 in Birmingham) was a real estate and business investor and long-time member of the Birmingham Board of Aldermen.

Enslen was the fourth of six children born to Christian and Elizabeth Flynn Enslen. He was educated at public schools in Wetumpka, then Birmingham after relocating with his father to the newly-founded city in 1871, where he worked in the family business. He was one of the bachelors in attendance at Charles Linn's famous "Calico Ball" on December 31, 1872.

Enslen completed a business course through Eastman College of Poughkeepsie, New York in 1877 and went into the mercantile business with his father. He married the former Della Evans on December 5, 1878. He was commissioned a lieutenant in the Birmingham Artillery from 1878 to 1884. He worked as a cashier of his father's Jefferson County Savings Bank when it was founded in 1885.

Enslen joined the Board of Aldermen in 1888 under Mayor B. A. Thompson and continued to serve under Mayors A. O. Lane, David Fox, James Van Hoose and Frank Evans, who left office in 1899. In 1897 Enslen was elected president of the Birmingham Clearing House. He was a partner in the New York City brokerage Lewis A. May & Company which failed in December 1900. In 1907 he moved into a gracious marble-clad Neoclassical mansion at 2731 Highland Avenue.

Enslen became president of the Jefferson County Savings Bank in 1909 and founded the Great Southern Automobile Company, the first auto manufacturer in the South, that same year. After his father's retirement in 1911 he took chairmanship of the bank, as well. He moved the business into the 25-story Jefferson County Savings Bank building in May 1914. The development became a financial burden for the bank, which suffered a run in January 1915 and closed its doors on January 28 of that year. Enslen was indicted for accepting deposits after the bank's insolvency.

Enslen and his wife had three children: Julia, Eugene Jr, and Minnie Gip. He died in 1941 and is buried at Oak Hill Cemetery.