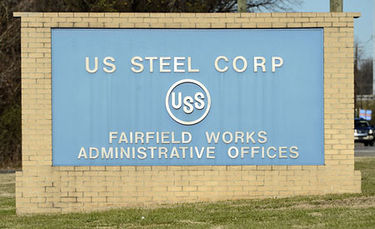 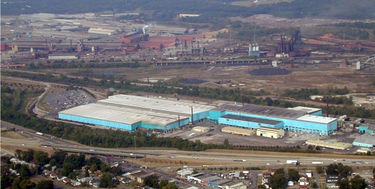 The Fairfield Works is a former integrated steel mill, one of five operated by U.S. Steel of Pittsburgh, Pennsylvania. Its furnaces and fabrication facilities, in the planned industrial suburb of Fairfield, manufactured hot-rolled, cold-rolled and coated sheet products from raw materials.

The plant, originally to be named "Corey", was planned and constructed by U.S. Steel's Tennessee Coal, Iron & Railroad Company (TCI) division beginning in 1909. Utilizing locally-mined resources, the new plant promised to be so efficient at making cheap steel that its parent company levied an internal tariff (the 'Pittsburgh Tariff') in an effort to prevent the Birmingham product from undercutting the profitability of its Pittsburgh mills.

Fairfield Works went into blast in 1917. It was connected to the Warrior River at Birmingport by rail line in 1920. In 1925 TCI completed the High Ore Line Railroad, providing a direct supply route from its iron ore mines at Wenonah to the furnaces in Fairfield. It was also a primary customer of the Birmingham Southern Railroad, which serviced numerous coal operations in the district.

The blast furnaces, already supplying U.S. Steel's nearby American Steel & Wire Co. plant, were further complemented by completion of a merchant steel mill in 1923 and a sheet products mill in 1926. At its peak during World War II, U.S. Steel employed more than 45,000 workers in the Birmingham District, mostly at the Fairfield and Ensley Works.

TCI moved its headquarters offices from the Brown-Marx Building in downtown Birmingham to the Flintridge Building overlooking the Fairfield Works in 1951, in anticipation of being absorbed as a division of the parent company in 1952. In the early 1960s the plant was expanded, absorbing much of the former community of Westfield.

By 2006 Fairfield Works was still the largest steel-making plant in Alabama, employing 2000 workers to operate a single blast furnace and three basic oxygen process (QBOP) furnaces to produce 2.4 million tons of raw steel per year. In 2010 the plant was still one of the county's largest polluters, emitting 4,481 tons of particles into the air that year.

U.S. Steel closed Fairfield Works in November 2015, idling around 1,100 workers. At the time, there were plans to construct a new electric arc furnace at the nearby Fairfield Tubular Operations plant. Those plans were tabled until 2020 due to low demand for steel tubular products.

The blast furnaces at Fairfield Works were demolished in October 2017.