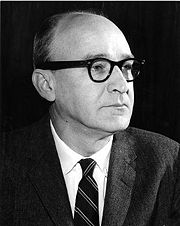 Fant Hill Thornley (born c. 1909; died 1970) was director of the Birmingham Public Library from 1953 until his death. Prior to that he was a reference librarian from 1949, and had previously been a partner with Emma Bostick in the Columbia, South Carolina publishing company of Bostick & Thornley.

It was because of his friendship with Thornley that Birmingham investment banker Rucker Agee donated his extensive collection of antique maps to the library. In response to a lawsuit filed by activist Lola Hendricks, Thornley successfully urged the library board to desegregate the city's library system during a called meeting on April 11, 1963. In taking this action, he and the board defied a pledge by Mayor Art Hanes to desegregate the libraries "only at gunpoint."

Thornley is thought by some to haunt the Linn-Henley Research Library in downtown Birmingham. In 1977 archivist Marvin Yeomans Whiting saw the elevator doors — then a set of swinging doors — open, followed by the smell of Thornley's favorite Chesterfield cigarettes. In 1989 an electrician working at the library says a ghost appeared and spoke to him. He refused to return to the archives area.