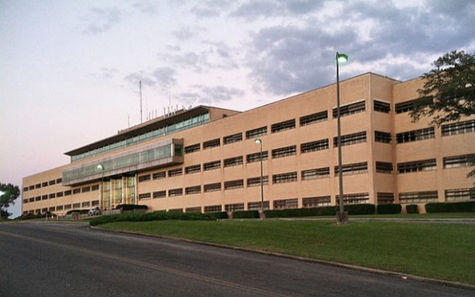 The Flintridge Building in September 2012

The Flintridge Building (or Flint Ridge Building) is a large 5-story modern office building developed in 1951 by Galbraith & Company as a divisional headquarters building for the Tennessee Coal, Iron and Railroad Company, which moved its offices from the Brown Marx Building in downtown Birmingham. It was designed by Birmingham-born architect Jack B. Smith of the Chicago, Illinois firm of Holabird, Root & Burgee.

The site, on E. J. Oliver Boulevard at Bermans Way, overlooks Fairfield Works from a ridge opposite I-20/59 in Fairfield. The central portion of the buff-brick building has glass-enclosed projections styled like "pressboxes" with a view of the works. The $6 million project was built by Daniel Construction beginning on January 23, 1950. The dedication and open house was held on December 22, 1951.

With the new building opened, TCI consolidated several administrative departments in Fairfield. The coal division moved from Pratt City and separate engineering departments in Ensley and Fairfield were put under the same roof. Other U.S. Steel divisions, including the Warrior and Gulf Navigation Company and the Southern Railroad also occupied offices in the building. A total of 1,200 administrative workers were on staff when it opened.

U.S. Steel, which had controlled TCI since 1907, consolidated its administrative functions in Pittsburgh in 1964, leaving a number of local offices in the building. In 2006 the company built an 11,000 square foot maintenance training center there.

The Flintridge Building was added to the National Register of Historic Places on June 2, 2004.

The building had once been offered to the city for a nominal $1 price. Former Mayor Larry Langford proposed that the city use it for a new Fairfield City Hall, and build a monorail to encircle it.

In 2011, Fairfield City Councilor F. D. Scott renewed a longstanding suggestion to use the site for a new Fairfield High School.