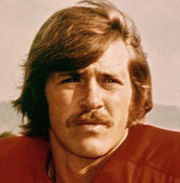 Blue spent his teenage years in Tampa, Florida where his family moved after his father, a U.S. Army captain, retired there. He graduated from George D. Chamberlain High School in 1962, where he lettered in football, baseball, track and field and basketball, and was also a member of the National Honor Society. His high school football team won a AA Florida state championship and he was later regarded by the St Petersburg Times as the 6th-best football player to ever come out of Hillsborough County.

Blue went on to play center for Shug Jordan's Auburn Tigers football team for the 1965 to 1967 seasons. He was selected 15th overall in the 1968 NFL draft by the San Francisco 49ers, and helped the team win three straight division titles. He was named an All-Pro four times.

Blue died at an assisted living facility in Carmichael, California of chronic traumatic encephalopathy, resulting from multiple concussions suffered during his NFL career. He was inducted into the Alabama Sports Hall of Fame in 2013.