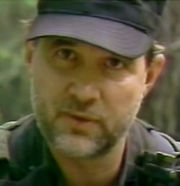 Joseph Franklin Camper Jr (born 1946) is a former soldier, self-described mercenary, author, and former owner of a paramilitary training camp near the Black Warrior River in western Jefferson County that has been linked to terrorism.

Camper is the son of Frank and Betty (Baughn) Camper of Hueytown. He was deployed to Viet Nam in 1965 and claimed to serve with the 4th Infantry Division's Long Range Reconnaissance Patrol (LRRP) during the Vietnam War. Military records in 1981 indicated that he was deployed for one year and worked as a truck driver, then was absent without leave after being posted to stateside duties. He claimed to have continued working for the United States as a covert operative, and to have infiltrated leftist groups on behalf of the FBI, including a stint posing as a military trainer for the Alabama Black Liberation Front. He also claimed to have trained local forces in Saudi Arabia and Panama, and to have carried out covert operations in El Salvador and Guatemala. For at least some time in 1979 he was noted as being employed as a mechanic by Saudi Arabian Airlines.

By 1980 Camper and his wife, Mavis were residing in Dolomite. That year he began operating a "Recondo" (reconnaissance/commando) training program, which he called "The Mercenary School," with field training sessions held in South Florida. He said he was motivated by fear of a Communist threat to the United States from Mexico, and with frustration over what he perceived as deficiencies in U.S. military training. He advertised the program in Soldier of Fortune magazine.

In March 1981 Camper and another instructor, Robert Lisenby were arrested with a group of armed students in camouflage on the Hollinswood ranch in Citrus County, two miles from the Crystal River Nuclear Power Plant. They were charged with felony trespassing and fined. Camper was held overnight and then returned to Alabama. In 1981 he testified against Lisenby, whom he had accompanied to Miami in an alleged murder-for-hire scheme involving rival drug gang leaders.

Camper soon relocated the recondo program to 77-acres of land he leased in western Jefferson County and also opened a gun store in Hueytown. He claimed the school attracted people from all walks of life who were interested in learning survival and fighting skills. The cost for a two-week course was $350 (later $500). He applied for recognition as a private school from the Alabama Department of Education, but was rejected.

Some individuals who sought training from Camper have been involved, or alleged to be involved, in a range of criminal and terrorist activities. Four Sikh extremists trained there in 1985 and were suspected of involvement in the downing of Air India Flight 182 over Ireland in 1985, killing 329 people, and in a failed plot to assassinate Indian prime minister Rajiv Gandhi. Another group of Merc School graduates, associated with Louisiana KKK leader David Duke, were arrested in New Orleans in April 1981 before they embarked on an alleged plot to overthrow the Dominican government.

Camper claimed his training program was strictly practical and non-political. Critics have labeled him a "right wing redneck" and characterized his Merc School as an "extended paintball game." He was also widely criticized for his disavowal of any responsibility for screening applicants or for illegal acts carried out by former trainees. He tipped off federal officials to a plot to smuggle weapons into Nigeria and testified against the defendants at trial. He also assisted the FBI in the capture of the Sikh conspirators in New Orleans before Gandhi's arrival. Some have interpreted his involvement with the FBI as part of a "sting operation" that went wrong, allowing the airline bombing to occur.

Camper is also a prolific author, having published several pulp novels, as well as training manuals and non-fiction accounts of his experiences.

On May 21, 1986 Camper was arrested at his home in Hueytown for aiding two California women in a plot to plant bombs in the cars of disgruntled employees at a school they operated. Camper was convicted and sentenced to serve 14 years in prison, while his associates William Hedgcorth, Paul Johnson and James Cuneo received sentences ranging from 5 years to 18 months. Camper's then-girlfriend, Lee Ann Faulk, was also charged with conspiracy, but was acquitted at trial.

Camper was assaulted at Leavenworth State Prison in 1987 and injured by scalding water. His attorney, [[Bill DelGrusso], claimed that the assault was motivated by CBS "60 Minutes" segment on him that depicted him as a government informer.

In July 1988 Camper testified in a public hearing before the Senate Foreign Relations Committee, during which some details of his cooperation with the FBI were confirmed. One of the criminal charges against him was reversed on appeal and he was released in December 1991 after serving 5 1/2 years. He returned to Birmingham with his wife and became involved in computer sales, opening a shop named ABC Computers.