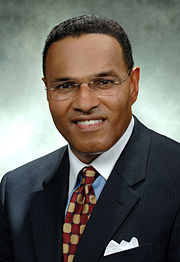 Freeman Alphonsa Hrabowski III (born August 13, 1950 in Birmingham) is the president of the University of Maryland Baltimore County, serving since May 1992.

Hrawbowski, descended from a family of slaves owned by a Polish immigrant farmer, was born into segregated Birmingham on the eve of the organized Civil Rights Movement. His parents were both teachers and he fell in love with math at a young age.

As a 12 year old, Hrabowski joined in the Children's Crusade during the Movement's Birmingham Campaign. He and many of his classmates were arrested and jailed for five days for their participation in the protests, and subsequently expelled from school. The next year, his classmate, Cynthia Wesley was murdered in the 1963 bombing of 16th Street Baptist Church. Another childhood friend, Condoleezza Rice, moved with her family to Denver shortly afterward.

Re-energized at 13 by a visit to Tuskegee Institute, Hrabowski buckled down in his studies, especially science and math, and graduated from Ullman High School at 15. He was recruited by colleges and universities around the country and enrolled at Hampton Institute in Virginia (now Hampton University), where he took the opportunity to spend a semester of study at the American University in Cairo, Egypt. While he was away, his fellow students elected him president of their senior class.

Hrawbowski graduated with highest honors from Hampton at age 19 with a degree in mathematics. He earned his Master of Arts in mathematics in 1971 and his Ph.D. in statistics and higher education administration in 1975 at the University of Illinois at Urbana-Champaign, all by the age of 24. Realizing that he was one of only a few African Americans on campus at Illinois, he began a tutoring program for area African American high school students, teaching college level math and science.

After receiving his doctorate, Hrabowski stayed at Illinois for a year as assistant dean of student services before returning to Alabama in 1976 to become the associate dean of graduate studies at Alabama A&M University. He then went to Coppin State College in Maryland as dean of arts and sciences and was promoted to vice president of academic affairs in 1981.

He joined the faculty of the University of Maryland, Baltimore County in 1987 as Vice Provost. He was promoted to Executive Vice President and then, in 1999, became President of the University. In 1988 he established the Meyerhoff Scholarship program, first open only to African American males, but now open to all high-performing students.

As a researcher and professional educator, Hrabowski has set out to prove that given a setting in which they are expected to excel, minority students will be able to succeed.

Hrabowski serves as a consultant to the National Science Foundation, the National Institutes of Health, and numerous universities and school systems nationally. He is a member of the American Academy of Arts and Sciences and the American Philosophical Society. He also holds several honorary degrees, including honors from Princeton University, Duke University, UAB, Gallaudet University, and Binghamton University. He was named one of "America's Best Leaders" by U.S. News & World Report in 2008 and one of the "Top Ten College Presidents" by Time magazine in 2009. In 2011 the Washington Post and Harvard University Kennedy School's Center for Public Leadership named him one the "Top American Leaders".

Hrabowski and his wife, Jacqueline Coleman Hrabowski, have one son.