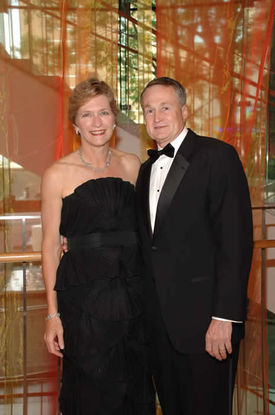 Gail Andrews and Dick Marchase at the 2007 Museum Ball

Gail C. Andrews (formerly Gail Andrews Trechsel) (born 1953, in California) was the R. Hugh Daniel Director of the Birmingham Museum of Art from 1996 until her retirement in fall 2017.

Prior to that, she served in a variety of curatorial and administrative positions, beginning in 1976 as the museum's first Curator of Decorative Arts, as Acting Director in 1991-92, she guided the Museum through its $21 million expansion and renovation, a project that resulted in Birmingham claiming the largest municipal museum in the southeast.

Andrews graduated from the College of William and Mary in Williamsburg, Virginia and received her Masters degree from the Cooperstown Graduate Programs. She has written or contributed to over twenty-five publications, primarily in her speciality areas of folk art and textiles, and was the recipient of a fellowship from the National Endowment for the Arts to further her study of southern-made textiles.

Andrews is active in a variety of arts and educational organizations in Birmingham and has served on the Alabama State Council on the Arts, the Birmingham Arts Commission, the University of Alabama at Birmingham Leadership Cabinet, and the Region 20/20 Arts and Culture Task Force of which she was co-chair. She was a member of the first class of Leadership Birmingham and is an alumna of Leadership Alabama.

Also active with professional organizations, Andrews has served as a board member, treasurer, and president of the Association of Art Museum Directors, as a reviewer for the accreditation committee of the American Association of Museums, and as a peer review panelist for the National Endowment for the Arts and the Institute of Museum Services. She was inducted into the Alabama Academy of Honor in 2005.

Andrews was previously married to Haydn Myer Trechsel, a Birmingham attorney. They have two children, Julia Trechsel Davis and Andrew Trechsel. In 2006, she married Richard B. Marchase, Vice President of Research and Economic Development at University of Alabama at Birmingham, and resumed using her maiden name of Andrews the following year.