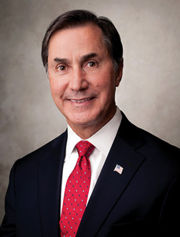 Gary Palmer (born c. 1951 in Hackleburg, Marion County) represents the 6th Congressional District of Alabama in the U.S. House of Representatives and was a former president of the Alabama Policy Institute.

Palmer earned a bachelor of science in operations management at the University of Alabama in 1972. He joined the Alabama Family Alliance in 1989 and rose to the position of president. The AFA was renamed the Alabama Policy Institute in 2000.

Palmer made his first run for elected office in the 2014 Republican primary for U.S. Congress, explaining that he felt "called" to seek the office. He finished second in the primary behind state legislator Paul DeMarco, but after a bitter runoff campaign, overtook DeMarco to win the nomination in the overwhelmingly-Republican 6th District. He easily defeated Democratic challengers Mark Lester, David Putman and Danner Kline in the 2014, 2016 and 2018 general elections. He has pledged to limit his time in office to five terms.

In November 2018 Palmer was elected to succeed Luke Messer as Chair of the House Republican Policy Committee.

Palmer and his wife, Ann, have three children: Claire, Kathleen and Rob.