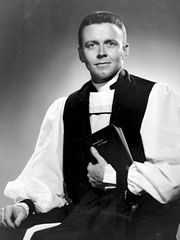 The Right Reverend George Mosley Murray (born 1919 in Baltimore, Maryland; died July 14, 2006 in Fairhope) was a former bishop of the Episcopal Diocese of Alabama and of the Diocese of the Central Gulf Coast. He was elected president of the House of Bishops in 1978 and retired from the active ministry in 1981.

Born in Baltimore, Murray's family moved to Bessemer while he was still a child. He studied business at the University of Alabama, graduating in 1940 and moving to Charlotte, North Carolina to work for General Electric. In 1942 he began a four year tour of duty in the U. S. Navy, including a 17-month stint on the submarine Pintado which patrolled the Pacific theater.

After his 1946 discharge, Murray enrolled in the Virginia Theological Seminary, graduating with honors in 1948 with a Bachelor of Divinity. Shortly after he was ordained by Alabama bishop C. C. J. Carpenter and began serving as Episcopal student chaplain for the diocese. He became Carpenter's Coadjutor (assistant) in 1959 at a consecration in the Cathedral Church of the Advent.

During the Civil Rights Movement, Murray and his wife, Elizabeth Malcolm Murray were both active in calling for greater equality and human rights, but nevertheless found criticism from all sides, either for being too involved or not involved enough. While serving as Bishop Coadjutor, Murray was one of eight Birmingham clergymen who co-authored an April 12, 1963 open letter on racial tensions entitled "A Call for Unity". It was this letter to which the Reverend Martin Luther King responded in his famous "Letter from Birmingham Jail".

When Carpenter retired in 1969, Murray succeeded him as Bishop of Alabama. After two years he accepted the call to preside over the newly-created Diocese of the Central Gulf Coast, covering the southern third of Alabama and the Florida panhandle.

In addition to his ministry, he served on the Executive Council of the Episcopal Church from 1964 to 1970 and was a Regent of the University of the South in Sewanee since 1959. He held honorary degrees from Sewanee, the Virginia Theological Seminary, the University of Alabama, and St Bernard College. He was a Fellow of the College of Preachers at the National Cathedral in Washington D.C. and was given the Algernon Sydney Sullivan Award by the University of Alabama in 1953.