The school was established in 1904 by the then-independent Town of Woodlawn. It was named in honor of then-Alderman J. B. Gibson, who worked to secure its development. Woodlawn issued bonds to finance construction, but the decision on where to build proved divisive. Plans to expand Woodlawn Elementary School were set aside, and then it proved impossible to choose between two sites for a new school, so the money was split to build Gibson and Kennedy Elementary Schools at the same time. 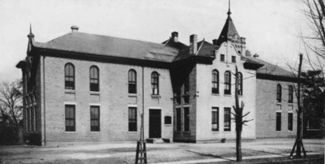 The first Gibson School building was a two-story brick-clad building with arched upper windows and ornate gable dormers located on the 5000 block of 2nd Avenue North. It held six classrooms, but was expanded to ten rooms with the addition of an annex before 1910, when it was absorbed into Birmingham as part of the Greater Birmingham annexation which took effect that January.

The second school building was constructed at 956 50th Street North in 1926 with an addition completed two years later. The former school, dubbed "Old Gibson" remained in use for the middle grades while younger students reported to the new building. Those roles were switched two years later when "New Gibson" was expanded.

An 8-room addition to the school was designed and put out to bid in 1942 . It was constructed entirely with funding from the Federal Works Agency to accommodate children from the Eastwood Homes public housing project. When it was completed in 1943 both "Old" and "New" Gibson were combined. The former school building on 2nd Avenue was converted into apartments and later demolished for a condominium project.

Long-time Principal James Pogue was accused of injuring children in 1949 and a petition was circulated calling for his dismissal. Faculty at the school and principals of other schools signed letter of support for Pogue. Pogue remained at the post until his death in 1951, overseeing another 6-room addition completed in 1950. At that point the building housed 30 classrooms, a 185-seat auditorium, a library, gymnasium, and 800-seat lunch room.

In 1952 members of the PTA presented the school with a painted portrait and a marble water fountain for the main hallway to preserve Pogue's memory.

In September 1955 vandals broke into the school. They broke windows, emptied fire extinguishers, turned on gas jets in the home economics room, and stole several American flags, leaving one damaged. By 1956 the school reached a record enrollment of 1,225 students. That was reduced to 821 after the opening of Dupuy Elementary School in 1957, and to 765 in 1969.

Gibson Elementary closed in the Summer of 2010 with its remaining 260 students transferring the newly-built Hayes K-8 School. The Church of the Highlands purchased the school property in 2020 and began demolishing the school building in 2021.