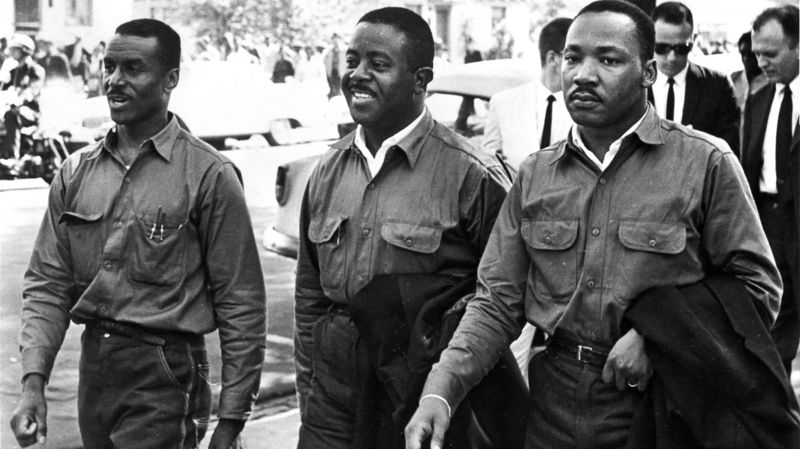 The Good Friday march was a Civil Rights demonstration organized by the Alabama Christian Movement for Human Rights and the Southern Christian Leadership Conference as part of their "Birmingham Campaign" to desegregate Birmingham businesses, parks and hiring practices. It took place on Good Friday, the Friday before Easter Sunday, on April 12, 1963.

The march was the advertised widely as the first participation in public demonstrations by SCLC leaders Martin Luther King Jr and Ralph Abernathy. Thousands of African Americans gathered along the route to see the spectacle, and many joined in behind the column of marchers as they passed, singing and chanting freedom songs.

King had arrived in Birmingham on April 2, shortly after the birth of his daughter Bernice, to join the leaders carrying out the planned campaign of nonviolent public demonstrations. Until this Friday, though, he had taken care to avoid personally risking arrest. The ACMHR's applications for parade permits had been unilaterally denied by Commissioner of Public Safety Bull Connor, who promised to "fill the jails" with protesters if the marches continued. King pledged at mass meetings to join in, saying that it was "better to go to jail in dignity than to accept segregation". He announced at a mass meeting on April 10 that in two days, "Ralph Abernathy and I will make our move. I can't think of a better day than Good Friday to for a move to freedom."

That same Wednesday as King's announcement, the Birmingham City Commission secured a court order from Jefferson County Circuit Court Judge Wiliam Jenkins enjoining the movement from "sponsoring, encouraging or participating in mass demonstrations," without securing a permit from the city. The injunction was served at the Gaston Motel at 1:00 AM on Thursday. Though the SCLC had generally agreed to obey court-issued opinions while challenging local laws, they had already determined that in Birmingham they would defy any court orders that they interpreted as denying them their constitutional rights. Wyatt Walker prepared a formal response to that effect to be issued to the press on Thursday morning.

On Thursday evening, Abernathy addressed a mass meeting at 6th Avenue Baptist Church, promising that, "we are going to turn this town upside down and inside out tomorrow," and reassuring those with second thoughts that they would appeal, "to a higher judge than Judge Jenkins."

The SCLC was notified on Friday morning that the city was now charging $1,500 rather than $200 for bail, and that their bail fund was nearly depleted. King's speaking fees and donor contacts were its primary source of income, and some urged him to avoid arrest so that he could raise money to get the other marchers out. King's father also worried that in a city like Birmingham where the police worked hand in hand with the Ku Klux Klan, that an arrest might lead to his son's death. After a period of prayer and fasting alone in his room at the motel on Friday morning, King changed into denim work clothes and announced that he would lead the Good Friday march as a matter of faith. Wyatt Walker telephoned Birmingham Police inspector W. J. Haley to inform them of the time and place of the scheduled march.

Participants and curious onlookers gathered Friday morning at 6th Avenue Zion Hill Baptist Church while speakers such as Andrew Young and Dorothy Cotton addressed the growing crowd. King was expected at noon, but did not arrive until after 1:00 PM, having walked to the church from the Gaston Motel in the company of Abernathy and Shuttlesworth, wearing matching blue denim work shirts. The marchers departed from the front doors of the church at 2:40 PM.

The group proceeded east in the direction of Birmingham City Hall. Along the route, police had cleared away white onlookers. Black neighbors, many dressed in their Sunday best, observed the procession. Some cheered and some merely watched. A few knelt in prayer as the marchers passed St Paul United Methodist Church and 16th Street Baptist Church. As they reached the corner of Kelly Ingram Park they were within sight of the intersection of 17th Street, a line of demarcation between the "Negro district" and downtown that was barricaded by police, ready to arrest anyone who tried to pass. At this point, Shuttlesworth broke off from the group as planned to avoid arrest.

Abruptly, King turned the column south on 16th Street and then back onto 5th Avenue North to elude the police checkpoint. As they proceeded eastward on 5th Avenue they crossed 17th street and began processing alongside the marble colonnade of the U.S. Post Office and Federal Courthouse. Connor shouted orders to his motorcycle police to intercept them and allow them no further. As a new barricade was formed on 5th Avenue, one of the motorcycle officers hopped the curb just ahead of the group.

The officer yelled at the group to "halt", and immediately the leaders dropped to their knees and began to pray, followed by the rest of the main demonstrators. The crowd following dispersed as more and more police arrived and herded them back toward the park with little incident. Three individuals who did not immediately move along and instead argued with police were arrested along with the marchers. Connor told his forces not to clear the park or make further arrests of those not immediately involved, saying "let them stay there and sing all they want to."

Paddy wagons were pulled around, and most of the demonstrators were arrested peacefully. King was grabbed by the belt and heaved into the wagon. The site of the confrontation is marked on the Birmingham Civil Rights Heritage Trail. The marchers, numbering between 40 and more than 60, were taken directly to Birmingham City Jail for booking. All were charged with parading without a permit. Shuttlesworth was also charged and arrested at the Gaston Motel that night.

King was isolated in solitary confinement while the other marchers kept their spirits up by singing hymns and freedom songs, fulfilling Shuttlesworth's prediction that the marches would "turn the jails into church houses". Most demonstrators were bailed out the next morning. King was kept in prison and used the time to compose his "Letter from Birmingham Jail" to detail the reasoning, strategy, and moral context for the public demonstrations.

At the city jail, King was isolated in solitary confinement while the other marchers kept their spirits up by singing hymns and freedom songs, fulfilling Shuttlesworth's prediction that the marches would "turn the jails into church houses". Most demonstrators were bailed out the next morning. King was kept in prison and used the time to compose his "Letter from a Birmingham Jail" to detail the reasoning, strategy, and moral context for the public demonstrations.

On Monday April 15, King and thirteen other organizers were also indicted for contempt of court for violating Judge Jenkins' order, with trial set before that same Judge on April 22. With bail money posted by Harry Belafonte, King left the jail on Saturday April 20 so that he could better participate in his defense strategy. Under the "collateral bar rule" Jenkins permitted no evidence or argument regarding the constitutionality of the city's parade ordinance or its application and heard only evidence regarding the court's jurisdiction and method of notifying the subjects of the order. On that basis the charges against four men were dismissed, but King and ten others were convicted as charged and sentenced to serve five days in prison.

The ministers appealed their convictions and mounted a challenge in Walker v. City of Birmingham. Eventually charges against three more defendants were reversed, but at every step, up to the U.S. Supreme Court, the primary argument of the appeals were overturned. In its 1967 opinion the Supreme Court affirmed that the proper remedy to challenge the permit ordinance was through the state courts and that without exhausting legal remedies, defiance of the circuit judge's order was unwarranted. With their appeals exhausted, King quietly flew back Birmingham on October 30, 1967 to serve out his five-day sentence in the Jefferson County jail.

A separate suit,Shuttlesworth v. City of Birmingham directly challenged only the city's actions in denying the permit and arresting the marchers. In that case, decided in the U.S. Supreme Court in 1969, the justices ruled that the city ordinance as written and applied violated the demonstrators' constitutional rights and thereby overturned Shuttlesworth's conviction.