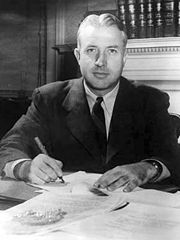 Seth Gordon Persons (born February 5, 1902 in Montgomery; died May 29, 1965 in Montgomery) was the founder of WSFA-AM in Montgomery and the 42nd Governor of Alabama, serving from 1951 to 1955, sandwiched between terms of the more flamboyant Jim Folsom Sr in an era when governors were ineligible for consecutive terms.

Persons, son of Frank Stanford and Kate Minnis Abrams Persons, grew up in Montgomery where his father owned a drug store. He attended a series of preparatory schools before enrolling at the Alabama Polytechnic Institute at Auburn in 1921. He majored in electrical engineering and presided over the "Hobo Club" noted for attending football away games dressed as tramps. He left after his freshman year and took a job with the Alabama Farmers Federation. He also worked for a cotton association, at IBM's plant in Ithaca, New York, and as the operator of a Montgomery service station before he opened a successful radio supply shop. He married the former Alice MccKeithen in 1928 and, with Howard Pill, launched Montgomery's first radio station, WSFA-AM, in 1930.

Governor Bibb Graves appointed Persons to the state's Rural Electrification Authority in 1935. Seeing the commercial potential of electrical power, he formed his own engineering firm which installed more than 10,000 miles of cable in the state, earning him a significant profit and respect statewide. In 1940 he campaigned for president of the Alabama Public Service Commission, a group he saw as corrupt and inefficient. Although he was the apparent winner of the general election, a recount led to his opponent taking office by fewer than 2,000 votes. He won a seat on the PSC in the 1942 general election and was elected president in 1944.

Persons made his first run for Governor in the 1946 gubernatorial election, but his campaigning was hampered by a persistent throat ailment and he finished dead last in the primary. During the 1950 campaign, Persons avoided taking sides in the split between the National Democratic Party and the States' Rights Democratic Party (Dixiecrats). He flitted to 385 appearances around the state in a helicopter and won 35 percent of the primary vote. Phillip Hamm finished second with 13% in the 15-man race and withdrew from the runoff. Persons won 90% of the vote in the general election to take the office.

Citing the ongoing Korean War, Persons elected to enter the office with no parade or lavish ball. He took the oath of office in a business suit on the steps of the Capitol and announced that he would not seek further office and would, instead, devote himself entirely to the state's business. His first act as governor was to call a meeting of the Alabama Polytechnic Institute's Board of Trustees to fire head football coach Earl Brown and replace him with Shug Jordan.

Unlike Folsom, Persons worked well with the Alabama State Legislature in enacting a conservative slate of modest reforms. He issued an executive order limiting the maximum speed limit on state highways to 60 miles per hour in daylight and 50 mph after dark. He publicly criticized brutal treatment of state prisoners and pushed for a law placing the Alabama Department of Corrections under a supervisory board. As a long-time radio man, Persons believed strongly in the benefits of broadcasting and succeeded in making Alabama the first state to create an Educational Television Commission. He also signed a law making Alabama a "right to work" state and limiting the influence of labor unions and won more funding for public schools. As governor during the height of the "red scare", Persons signed a bill that required candidates to declare a party affiliation and prevented members of the Communist Party from holding public office. He also signed amendments designed to bolster Jim Crow restrictions on voting rights as earlier provisions were struck down by federal courts. On the other hand, Persons did win reductions in poll taxes and his administration quietly prepared the state for acceptance of federally-mandated school desegregation.

Persons suffered a heart attack in November 1954 and took leave of office, with Vernon Merritt, his executive secretary, left to conduct state business. He was considered a front-runner for the 1958 gubernatorial election, but, true to his pledge, did not formally enter the race. A minor stroke that year helped to solidify his retirement. He died following a larger stroke in May 1965. He was survived by his son, Seth Jr, and is buried at Greenwood Cemetery in Montgomery. The Dauphin Island Bridge in Mobile County is named in his honor.