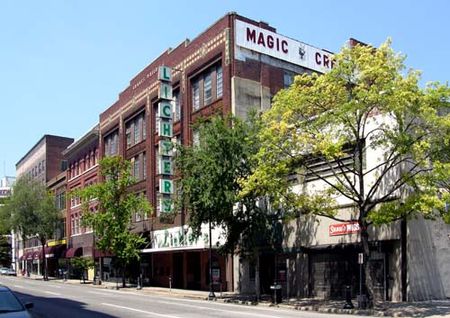 This article is about the 1912 commercial building, for other similarly-named buildings, see Graves Building (disambiguation).

Graves Building or Graves Block is a four-story commercial building at 1814-1824 3rd Avenue North, across from the Alabama Theatre. The eastern part (1822–1824) was constructed in 1904 by attorney and real estate developer William Graves, who had also founded the Graves Shale Brick Company in 1901. The western part of the four-bay building, spanning 100 feet (1814–1820), was completed in 1912. It was designed by Harry Wheelock and composed of brick with subtle terra-cotta ornamentation supplied by the Atlantic Terra-Cotta Company. Roper & Strauss was the contractor.

In 1961 a major remodeling and modernization of the left side of the building was undertaken by the Vaughan-Weil department store and Engel Realty. Vaughan-Weil, long occupying the former Duke Brother's space, expanded into the former Dailey's Clothes slot at that time. Architect Greer, Holmquist & Chambers designed the renovations, which were executed by the Mann Brothers Building Co..

By 1970 Lawrence Furniture occupied the right side, as well as a "third floor annex" which extended westward over the adjoining Vaughan-Weil store. A major fire broke out in this annex on December 17, 1970, causing about $1 million in damages, mainly from lost stock.

By 1977 Mr King Furniture had taken over the Graves Building. The left-side ground floor space was the home of The Playhouse costume and prop shop until 2009. The right side most recently housed Lichter's Furniture and Jewelry. Both remained vacant until Appleseed Workshop purchased the eastern two bays of the building in 2016 and redeveloped the ground floor for Shu Shop and the Wheelhouse Salon and the fourth floor for office tenant Platypi.

In 2018 the western half of the building was redeveloped, along with the adjoining Roberts & Sons Building, as offices or retail with loft residences above. The Sher family, which owns the property, worked with Retail Specialists on the project. CCR Architecture & Interiors designed the renovations, which were carried out by Rives Construction.