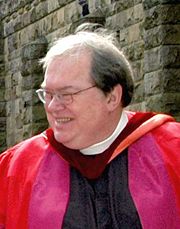 Guy Fitch Lytle III (born October 14, 1944 in Birmingham; died July 15, 2011 in Winchester, Tennessee) was a professor of divinity and church history, and dean of the School of Theology at the University of the South in Sewanee, Tennessee.

Lytle was the son of Nelle Stuart and Guy Fitch Lytle, Jr of Birmingham. As a boy he was an Alabama Youth Tennis champion and competed as the state's representative in the National Youth Tennis Championship. He completed his undergraduate studies at Princeton University in 1966 and was a Marshall Scholar at Oxford University in England. He went on to earn a Master of Arts and Ph.D at Princeton.

Lytle taught at the Catholic University of America, the University of Texas, and the Church Divinity School of the Pacific before being offered the position of Dean of the School of Theology at Sewanee in 1991. During his 11 years there, the school doubled in size and increased in national prominence. With the assistance of his wife, Maria, he expanded student outreach programs and developed programs in Hispanic ministries. His time was also marked by controversies within the faculty, with Lytle seen as capable, but too orthodox for some.

Lytle, who had planned to retire at the end of a sabbatical in 2011, died in July of that year of complications from diabetes. He was survived by his wife, two daughters, and three grandchildren.