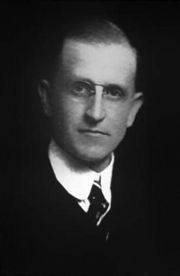 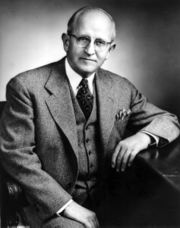 Guy Everett Snavely (born October 26, 1881 in Antietem, Maryland; died March 12, 1974 in Birmingham) was president of Birmingham-Southern College from 1921 to 1937 and from 1955 to 1957 and later served as Chancellor of the college and as executive director of the Association of American Colleges and Universities from 1937 to 1955.

Snavely, the son of Charles and Emma Rohrer Snavely, earned his bachelor's degree in education as Johns Hopkins University in 1901. He spent some time as an instructor at the Maryland Nautical Academy in Easton and as vice-president of the Milton Academy in Baltimore before resuming his own studies. He spent the Summer of 1905 studying at the Allaiance Francaise in Paris, and married the former Ada Rittenhouse on September 27 of that year in Kingsville, Maryland. He remained at Johns Hopkins where he completed a PhD in 1908. While still completing his graduate studies, he worked as an instructor in Romance languages at Allegheny College. He was made an assistant professor in 1907 and a full professor of French in January 1909, adding literature in 1910. Also, from 1908 to 1919 he served as the college's registrar. In 1914 and 1915 he taught at New York University as a visiting professor of Romance Languages.

Snavely left Allegheny to organize and direct the southern division of the American Red Cross in Atlanta, Georgia, remaining in that position through February 22, 1919 when he was promoted to assistant to the general manager in Washington D.C. In October of that year he accepted an appointment to serve as dean of Converse College in Spartanburg, South Carolina.

He was appointed to succeed Cullen Daniel as the second president of Birmingham-Southern College in 1921. Snavely was inaugurated on his fortieth birthday at a 2:30 PM ceremony at First Methodist Church downtown. President Warren Harding, visiting Birmingham for its semicentennial was in attendance, along with Harvard president Henry U. Sims. He was the first to reside at the President's House, constructed in 1925 on Birmingham-Southern's academic quad.

in 1933 Snavely dismissed sociology professor Kenneth Barnhart, partly because of his liberal writings about prostitution, slum housing and criminal justice. The decision to dismiss him was announced shortly after he appeared at a Birmingham rally for the Scottsboro boys.

As director of the Association of American Colleges and Universities, Snavely led the lobbying effort to raise the draft age to 21 in the Burke-Wadsworth Act. He was asked to head the scholarship program for the Miss America contest.

Ada Snavely, the mother of three children, died in 1949. He remarried Louise Hutcheson in Birmingham in 1950, and later married Madelyn Hale in 1964.

Snavely died in 1974 and is buried at Fork United Methodist Church Cemetery in Baltimore, Maryland.