From Bhamwiki
(Redirected from Harlan Grooms)
Jump to: navigation, search 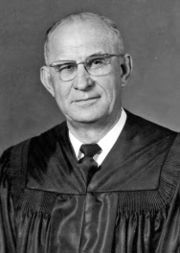 Harlan Hobart Grooms (born November 7, 1900 in Montgomery County, Kentucky - died August 23, 1991 in Birmingham) was a Federal district court judge from 1953 until his death.

Grooms was a 1926 graduate of the University of Kentucky law school where, as a senior served as editor in chief of the Kentucky Law Journal. After graduating he moved to Birmingham to enter private practice with the firm of Coleman, Coleman, Spain and Stewart. He served in the 87th Infantry Division of the U. S. Army Reserve until 1939 and rose to the position of senior partner in the Birmingham firm of Spain, Gillon, Grooms & Young before he was appointed to the United States District Court for the Northern District of Alabama by President Dwight Eisenhower, filling the seat vacated by Clarence Mullins.

In 1956 Grooms followed an order from the United States Supreme Court to instruct the University of Alabama that it should not prevent students from enrolling due to race. Autherine Lucy was subsequently enrolled, but soon later suspended from classes out of concern for growing student unrest at her presence.

Grooms dismissed a suit brought by the Alabama Christian Movement for Human Rights regarding the hiring of black officers to the Birmingham Police Department on the grounds that the statute of limitations had expired since the initial complaint.

In "Boman v. Birmingham Transit Company" (1958), Grooms upheld segregated bus seating, concluding that the 14th Amendment applied only to actions taken by government and not those taken by private companies operating under a public franchise.

On October 24, 1961 Grooms ordered that the segregation of public parks was unconstitutional. Rather than integrate the parks, Art Hanes's Birmingham City Commission closed them to the public altogether.

In 1962 Grooms issued an order directing the University of Alabama to admit Vivian Malone and James Hood. Governor George Wallace, Jr made a show of barring them with his "Stand in the schoolhouse door" before federalized Alabama National Guard troops escorted them into Foster Auditorium to enroll.

In 1969 Grooms was promoted to senior judge of the court and his former seat was given to Frank McFadden. For most of his life he was a member of the First Baptist Church of Birmingham, chairing the Board of Deacons and teaching a men's Bible class. He later transferred to the Baptist Church of the Covenant and also chaired that congregation's Board of Deacons. Grooms was a long-time trustee of Samford University and sat on the Board of Advisors for its Cumberland School of Law and School of Nursing. He also served on the Board of Trustees for Birmingham Baptist Hospitals and the Alabama Baptist Foundation, as well as on the finance committee of the Southern Baptist Convention.

Grooms died at home in 1991. He was survived by his wife, Angeline, and four children. His daughter, also named Angeline, was crowned Miss Alabama in 1966 and was elected to the Birmingham City Council in 1972.