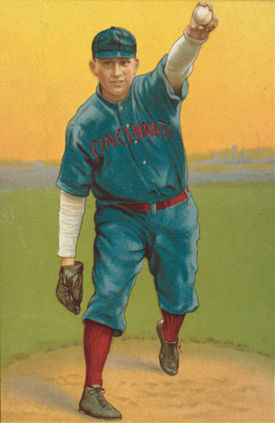 Harry Coveleski in 1910, just before being acquired by the Barons

Harry Frank Coveleski (born April 23, 1886 in Shamokin, Pennsylvania; died August 4, 1950 in Shamokin, Pennsylvania) was a left-handed pitcher for the 1910 Birmingham Barons. He played in the major leagues for the Philadelphia Phillies and Cincinnati Reds before coming to Birmingham. He was traded after one year to the Chattanooga Lookouts, where he eventually regained his form and went on to play four seasons with the Detroit Tigers.

Coveleski , the younger brother of pitching star Stan Coveleski, made his major league debut with the Phillies on September 10, 1907, in the midst of a playoff series against the New York Giants. Over the course of five days, he notched three victories, including one against Christy Mathewson, earning the nickname "The Giant Killer". During the next season he developed trouble with his arm (and, reportedly, with his appetite for drink) and he was traded to the Cincinnati Reds that January. He had another disappointing year there, walking 16 batters in one memorably long game.

Rick Woodward bought Coveleski's contract from the Reds for $1,000 and put him on the rotation for his 1910 squad, managed by Carlton Molesworth, that he would showcase in his newly-built Rickwood Field. He was frank with local sportswriters about his disappointment at a move that he considered a demotion, but won over fans with a July 17 no-hitter that ended up as a loss in extra innings. He followed that with a no-hit victory on July 31, beginning a streak of wins that dropped his ERA to 1.55. Coveleski got the start for Rickwood's August 18 opening day game against the Montgomery Climbers, and avoided a 2-1 loss on a ninth-inning rally by Barons' batters Roy Ella and Lou Emory. He finished the season with 21 wins for the Barons, securing his last against the Southern Association champion New Orleans Pelicans. He held their star slugger Shoeless Joe Jackson hitless in four plate appearances for the 1-0 shutout.

Woodward traded the problem-prone star to Chattanooga for the 1911 season, and Coveleski seemed to justify the trade by going 25-37 in his first two seasons there. He regained his composure in 1913, notching a league-leading 28 victories and earning notice from the Detroit Tigers.

Coveleski joined the Tigers in the 1914 season, and pitched over 300 innings, completed 23 of his 36 games, and won 22 games, second in the American League only to Walter Johnson. In four of his five seasons with the Tigers, Coveleski's ERA was under 3.00, and his 2.34 ERA with the Tigers is still the franchise's all-time career record. He played his last game in the majors on June 23, 1918, ending his career with an 81-55 major league record, a career 2.39 ERA, and 511 total strikeouts.