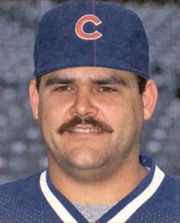 Héctor Balasquide Villanueva (born October 2, 1964 in Rio Piedras, Puerto Rico) was a baseball player for UAB who went on to play for the MLB's Chicago Cubs and the St Louis Cardinals. He is one of only three former Blazers to play in the major leagues.

Villanueva was the second of five children born to Héctor and Lourdes Villanueva in the Rio Pedras district of San Juan. He attended Cupeyville High School and, at his parents insistence, went on to college, signing an offer from UAB.

Blazers coach Harry Walker worked with Villanueva to change his dead pull swing to an inside-out to right. He lost his eligibility in a dispute with a professor over a missed exam near Thanksgiving. Cubs scout Joaquín Villa signed him to the Cubs system in 1985 and he was assigned to A-level Peoria, and then played for the off season in the Puerto Rican Winter League. In 1987 he moved up to AA Pittsfield, then to AAA Iowa Cubs in 1989.

Throughout his playing career, Villanueva struggled with his weight. After losing 30 pounds, he was called up to fill a backup catcher spot on the injury-riddled Cubs roster on June 1, 1990. He hit three home runs in his first six games, including a the game-winner in the 10th inning against the Cardinals in late June. He played 3 seasons with the Cubs, peaking in 1991 with a .276 batting average (53 hits in 192 at bats), with 13 home runs and 32 runs batted in. During that season he put together a streak of five consecutive hits

Villanueva was released in March 1992. He was signed by the St Louis Cardinals in December. In June 1993 he had a five RBI game to lead the Cards to a 9-2 victory, but averaged only .145 in 17 games before being released the following August.

Villanueva extended his career in the AAA-level Mexican League and periodically returned to the U.S. to play. In 2000 he played a full season with the independent Atlantic City Surf, batting .397 with 137 hits and 38 home runs and 95 runs batted in.

Villanueva played his last season of summer baseball for the Puebla Pericos and retired from the Puerto Rican Winter League in 2003. He took a job managing the athletic fields at his home town park. He has also managed amateur teams and refereed volleyball and handball games.

Villanueva and his wife, Gizelle, have four children: Alana, Soleil, Omar and Joshua.