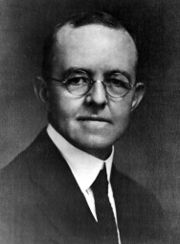 Edmonds was a graduate of the University of Tennessee and a football coach at Centre College in Kentucky when he decided to enter the seminary. He completed his studies at the Presbyterian Theological Seminary in Louisville, Kentucky and took over the pulpit at the First Presbyterian Church of Montgomery in 1907.

In 1913 he moved to Birmingham to become pastor of South Highland Presbyterian Church. He and his wife lost a second child, a girl, in 1914, having already lost a young son while in Montgomery.

In July 1915 Edmonds reported to the church's session that his theological beliefs had departed from accepted Southern Presbyterian doctrine. Specifically, he rejected an absolute belief in Biblical inerrancy, the depravity of mankind, the virgin birth, the divinity of Christ proved by resurrection, and the need for atonement, as understood in the Westminster Confession and the Larger and Shorter Catechisms.

The matter divided the congregation, and resulted in hearings before the North Alabama Presbytery court, meeting in Fayette on October 19th. He was questioned and given a month to pray over the matter before the court's next session. He opted to resign from the church on October 23, and founded the Independent Presbyterian Church the next day with a service for 500 followers in the building of Temple Emanu-El.

Edmonds led the new church from its founding, through the construction of a new building at Rushton Park, up until 1942, when he resigned to become dean of Rollins College in Winter Park, Florida. He returned to Birmingham in 1947 and became a frequent contributor to the Birmingham Post-Herald and to numerous magazines, as well as serving as pastor of Pilgrim Congregational Church between 1949 and 1952. In 1948, Edmonds served as the moderator and host of "Junior Town Meetings," a speech competition series in which local high school students vied to be featured on a national broadcast of the ABC Radio program "America's Town Meeting of the Air." Edmonds also published several books before his death in 1960.

Edmonds' son Bill was one of the founders of BE&K. Together they founded the Kirkwood-by-the-River retirement community on the Cahaba River between Irondale and Leeds.