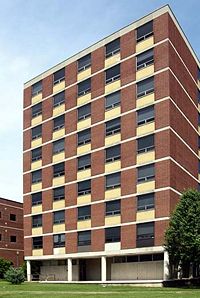 Florence A. Hixson Hall was a former residence hall for nursing students at 820 18th Street South adjacent to Unity Park on the UAB campus. The nine-story building was built in 1960 with the assistance of federal funds secured under the Hill-Burton Hospital Survey & Construction Act of 1946.

Furnished student rooms were 12 feet x 16 feet and made available for either single- or double-occupancy. Each floor had two shared bathrooms and a shared kitchen. The building also housed a 24-hour computer lab, a large study area, recreation room, television lounge, laundromat and vending machines. Glassed-in booths on the main floor were originally intended as spaces where the buildings' female residents could socialize with male visitors. They were later used as study cubicles.

In 1985 it was dedicated in honor of Florence Hixson who helped re-establish the School of Nursing at UAB. The building, at the time the oldest active dormitory at UAB, was closed in August 2006 due to the excessive costs required to bring the building up to modern codes during any major renovation. It was demolished in 2007 and 2008.