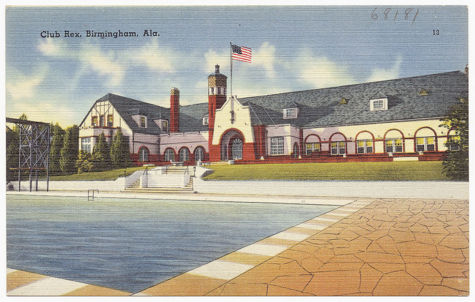 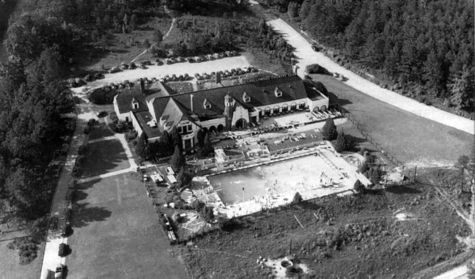 The Hollywood Country Club (also known as Club Rex) was a private social club built by developer Clyde Nelson as part of his Hollywood residential subdivision in 1926. It was located along Shades Creek Parkway across from the site later used for the Brookwood Village mall. Jake Salie designed the clubhouse in his self-described "Flemish Moderne" style. Nelson advertised the amenity to potential homebuyers as offering "the finest in meals and entertainments six or seven days a week." The club's expansive swimming pool proved a popular attraction, through the proposed golf course was never constructed. Harold McDermott served as club president in 1929–1930.

The Great Depression forced a number of changes to the Country Club lifestyle. Beginning in 1934 the city of Homewood leased the swimming pool during the summers from then-owner G. C. Lockhart and operated it as a public pool, providing a small source of revenue. Shuttle buses ran from Dunn's Drug Store and Broadway Street to pick up swimmers each day. The city allowed underprivileged children and delegates to the 1934 American Legion convention free use of the facility.

In the mid-1930s, TCI staffers and nightclub operators John O'Donnell and Bob Smith leased the property to operate as Club Rex. During their tenure, memberships for couples were sold for $10 per year, with free access to the pool and nightclub. Swimming passes were sold for 40¢ per day, or as coupon books good for 25 or 60 visits at a discount.

Mr and Mrs Joe Robino bought Club Rex in January 1945 for $59,500 and undertook a major renovation, including a $2,750 rotary steak broiler and a $75,000 penthouse club room with a glass dance floor. The swimming pool remained a major summer attraction. Bathers had access to a "Cave Room" on the ground floor of the clubhouse where lunches were served to swimsuit-clad diners.

The 5-acre destination gained new visibility with the completion of the R. H. "Bob" Wharton Bridge and the cloverleaf intersection with Montgomery Highway. A sixty-three foot long, double-sided neon sign reading "HOLLYWOOD COUNTRY CLUB" was placed on the ridge of the clubhouse roof. Dewitt Shaw and his orchestra were booked for a standing twice-weekly engagement.

The 1947 Miss Alabama Dairy Queen pageant was held at the club. Cab Calloway and his Cotton Club Orchestra played for a dance there during a visit the same year. The first Homewood Armory was constructed nearby the same year. In 1948 Shaw, the bandleader, leased the club and took over its management for a few years. His Spotlight Band continued headlining on Saturday evenings. 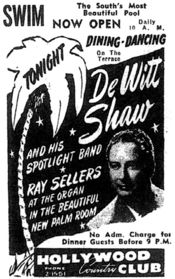 1951 advertisement for the Hollywood Country Club

In the 1950's, with Rubino back as proprietor, the Cave Room hosted dancing and live music, often featuring performances by "exotic dancer" June Marsh and comedian Al Goody. The swimming pool was open in the summers all through the 1960's. However, the concrete decking around the pool and the building in general was falling into disrepair. The club was the original meeting place of the Freunde Deutscher Sprache und Kultur when it formed in 1965.

In 1976, Huffman musician Jimmy Lanier leased the premises from Robino for a nominal fee of $500 per month. Lanier re-opened the former Cave Room in the basement, which was actually a temporary floor covering an indoor swimming pool with an Arabian desert motif on the walls. A local Birmingham band, Angelo Toad, featuring Tom DeVore on vocals and Joe Breckenridge on bass, played Monday through Saturdays. The club was called "Hollywood Underground" and was managed by Gene Hollis. Lanier would occasionally play with his musical friends Libba Walker on flute and Spuddy Cottingham on keyboards. Lanier made an attempt to resurrect the upstairs ballroom but found the task a bit too much. After one successful year Lanier made a move and opened the "Hello Hello Club" in the space that became the first Sammy's Go-Go on Valley Avenue.

In 1977, brothers Jake and Charles Pilliteri bought the lease and operated the club for about a year.

In 1978, Sam Raine, Jr and Norman Ceravalo took over running the property and had the ballroom semi-restored with black walls and an electronic dance-floor with a state of the art sound system and DJ-booth. It was again called "Hollywood Country Club" and even featured a Sunday disco for underage children sans alcohol. This establishment lasted four months and then was sold to Tony Ruffino and Dan Nolen who moved in and renamed it Brothers Music Hall.

In 2004 artist Don Stewart created a drawing of the Hollywood Country Club to be featured on the second in a series of Homewood historic Christmas ornaments, sold to benefit the Homewood Chamber of Commerce.