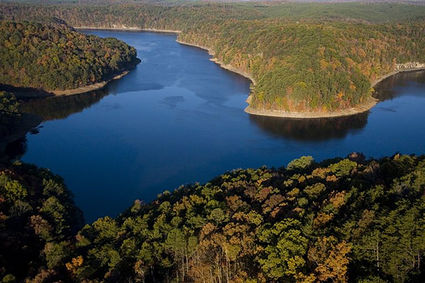 Inland Lake is a 7 1/2 mile long, 1,536 acre reservoir on the Blackburn Fork of the Little Warrior River, in southeastern Blount County. It was named for its proximity to the community of Inland, on Alabama State Highway 75 between Pinson and Oneonta.

The lake was planned in the 1920s by the Birmingham Water Works in order to fill unmet demand for industrial water and to increase the capacity for growth in the area's industrial sector. The board acquired the 2,200 acres of property needed for the new lake, and sought to finance the dam construction through loans and grants. Those plans foundered during the Great Depression until the Works Progress Administration approved a $2.3 million allotment and the Public Works Administration agreed to issue a loan backed by City of Birmingham revenue bonds, which were backed, in turn, by sales of reservoir water to industrial customers, which had already guaranteed to buy 7 million gallons per day.

The 180 foot-tall dam was designed to impound 22–25 billion gallons. A 60-inch diameter steel pipeline would deliver up to 40 million gallons per day to Ketona by gravity, or up to 60 million gallons per day with supplemental pumps. Excavation of the dam site and the relocation of roads crossing the lake bed was begun by WPA crews in 1935, with as many as 5,000 workers employed during peak activity. The PWA constructed the dam itself, after which WPA workers returned to complete the main pipeline and to construct the delivery reservoir and distribution system. The project was completed in late 1936.

Inland Lake and 2,200 acres of the surrounding land are still owned by the Birmingham Water Works, which maintains the water level at 784 feet above sea level, impounding about 21 billion gallons. As other sources of industrial water have been developed and demand reduced, the board has used Inland Lake as a source of drinking water. Current maximum withdrawal is 47 million gallons per day. A second pipeline is planned to increase the supply.

Public fishing access to Inland Lake is available from two boat ramps, one near Allgood and one near the dam. The Blount County Sheriff's Department controls access and charges a $5 fee per launch. On June 17, 1967, a 40-pound channel catfish was caught by Donald R. Cox at Inland Lake, which is still a state record.

In 2006 developer Gadson Woodall III proposed a a 3,500-acre gated residential community to be named Gadson's Retreat on his property near the southern shore of Inland Lake, near Holly Springs.

In December 2007, after months of severe drought, the lake fell to 56% of its normal level, the lowest it had been since 1959. In February 2008, the Water Works began using other sources for drinking water. On April 28 the lake was back to 100% capacity, for the first time since May 2006.