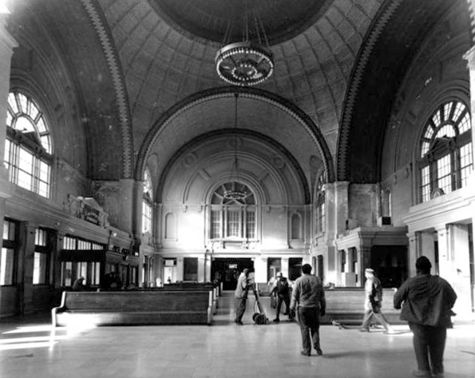 Main (white) waiting room of the Terminal Station. The colored waiting room was a much smaller space in the south wing

On December 22, 1956 the Baldwins, an African American couple holding round-trip tickets to Milwaukee they'd bought five days earlier on December 17, sat in the white waiting room while waiting for their train. Birmingham police officers requested the couple to move to the colored waiting room. When the couple refused, they were arrested and charged with disorderly conduct.

On January 25, 1957, the Baldwins brought a lawsuit against the Birmingham City Commission, the Alabama Public Service Commission (APSC) , and the Birmingham Terminal Company in U.S. District Court to desegregate the waiting rooms in Terminal Station, charging that the state railroad waiting room law was unconstitutional. All three defendant groups asked that the case be dismissed. On February 25, while action in the federal court was still pending, the city dropped the disorderly conduct charges against the Baldwins. Because the city dropped the charges, U.S. Discrict Judge Seybourn H. Lynne dismissed the suit on March 4, saying a mistake had been made and that the case was therefore hypothetical.

As a result of Judge Lynne's ruling, the Reverend Fred Shuttlesworth, a prominent Birmingham civil rights activist, announced to the media his intention to sit in the white waiting room, stating "Negroes will sit where white men sit and ride where white men ride and act like men and if we are molested for doing so, that will mean the city has stooped to intimidation, harassing and molesting Negroes". On March 6, when Shuttlesworth and his wife, Ruby Shuttlesworth, arrived at Terminal Station, they found a group of white men there to oppose them. Their first attempt to enter the waiting room was blocked by a white youth who pointed out the "white and interstate passengers" sign. Saying they didn't "want any trouble," the Shuttleworths attempted to enter via another door and were pushed back by a different white man. At this point, Birmingham police cleared a path, allowing the couple to purchase tickets and sit in the white waiting room for approximately 1-1/2 hours, awaiting their train to Atlanta. Police guarded them the entire time as the group of white men grew to a crowd of nearly 100. Included in the group was Robert Chambliss, who identified himself as a representative of the Ku Klux Klan.

Lamar Weaver, a white integrationist, had been told by Fred Shuttlesworth about his plan and went to the station to congratulate him. Not knowing Shuttlesworth had contacted the media, he was forced to park a block away due the number of people that had gathered. He greeted the couple, shook hands with Shuttlesworth, and sat with them as the crowd of men grew. The gathered segregationists taunted him and eventually police ordered everyone without tickets to leave the station, which included Weaver. Escorted to the door by police, he was hit with a suitcase and then followed and cursed by more than 20 men during his trip back to his car. After entering his car, it was stoned, breaking at least one window, and the mob began to rock it. As soon as the car was started, Weaver hurriedly drove away.

Weaver reportedly ran a red light and possibly injured a man with his car during his escape. He was then arrested for reckless driving. He asked for an immediate trial as he planned to leave town. City Judge Oliver B. Hall charged him $25 plus court costs. Later that week, Weaver submitted written testimony about the incident to a Senate judiciary subcommittee in Washington, D.C.

The Baldwins' case was appealed to the Fifth Circuit United States Court of Appeals. The case was heard starting in October 1957 with both the APSC and Birmingham Terminal Company again arguing the case should be dismissed. On January 14, 1958, the Appeals Court reversed and remanded the case back to the District Court.

After hearing the case as ordered by the higher court, Judge Lynne again dismissed it on November 23, 1959, saying that none of the defendants were "denying or threatening to deny Negroes equal privileges." The case was again appealed to the Court of Appeals in December 1959. Finally, on February 17, 1961, the Court of Appeals declared that segregation at the station was "in violation of the Fourteenth Amendment and the civil rights act," and ordered the District Court to remedy those practices. Therefore on April 24, having no other choice, Judge Lynne enjoined the three organizations from requiring or even compelling segregation based on race at the station, meaning the signs designating each of the two waiting rooms for separate races had to be removed.