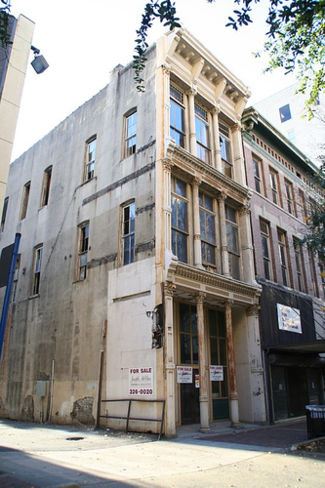 The Iron Age building in November 2007. Photographed by Wally Argus [1]

The Iron Age building is a narrow three-story commercial building located at 212 20th Street North adjoining the alley between 2nd and 3rd Avenue North on the west side of the street. Built in 1886 as a newspaper office, it boasts one of only two cast-iron facades remaining in the city. The "High Victorian Italianate" style is characterized by tall, elongated proportions and delicate details. The cast-iron supports allow for large expanses of plate glass to illuminate the interior of the structure. The interior of the press-office was plastered in pure calcimine by R. B. Abbott.

The 5,800-square-foot building was first constructed as the press office for the Weekly Iron Age newspaper, which was soon to merge with the Daily Herald to form the Birmingham Age-Herald. By 1890 it had been converted into a drug store with doctors' offices on the upper floors. Since then it has served as the Faust Cafe, Burt's Shoes, Lee Optical, and a delicatessen. It has been vacant since the the early 1990s.

In 1998 developer Joseph McClure Jr purchased the building from engineering consultant Craig Crosby and made plans to renovate for the offices of attorney Glenda Cochran. Moody & Associates prepared plans which included a rooftop garden featuring an iron, copper and glass gazebo. Part of the restoration would have involved having the company that fabricated the original facade cast new columns for the front of the building.

The planned redevelopment never took place. The owner did undertake some stabilization and repairs, including some restoration and protection of the cast-iron. The building was subsequenty listed for sale for $350,000. McClure marketed the building as one of about two dozen vacancies that he hoped could be used to rejuvenate after-hours activity in the city's Theater District.

In 2016 the building was purchased by Harsha Hatti, CEO of CoreLinQ Innovations, in order to incorporate it into his concept of a shared hub for healthcare technology startups, dubbed the Iron Age Project.

As part of Hatti's renovation project, the second and third floor facades, behind the cast iron posts, were replaced entirely by single sheets of 1 inch-thick polycarbonate. A retail tenant is expected to move into the ground floor after construction is completed in 2019.