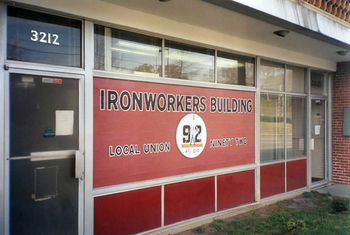 Ironworkers Local 92 is a local afflilate of the International Association of Bridge, Structural, Ornamental and Reinforcing Iron Workers (BSOIW), based in Washington D.C. It is headquartered at 2828 4th Avenue South and headed by FST-BM Fred Maddox and president Weldon McManus.

The Local was chartered on February 23, 1906 with J. R. Fox as president, and initially supplied structural iron workers for the framing of the Empire Building. The Local's first $1 million contract was for the erection of the Roden Hotel, which was never completed and eventually dismantled to supply metal to the war effort during World War I.

Members also participated in the construction of Sloss Furnaces, the Tutwiler Hotel, and the Alabama Theatre among numerous landmark projects in downtown Birmingham. The union also provided skilled labor for the construction and maintenance of industrial and transportation facilities throughout the Birmingham District.

In the late 20th century, the union's offices and meeting hall were located at 3212 6th Avenue South in Lakeview.