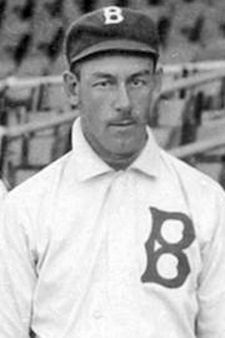 Irvin Key "Kaiser" Wilhelm (born January 26, 1877 in Wooster, Ohio; died May 22, 1936 in Rochester, New York) was a pitcher, manager and scout in major and minor league baseball. His streak of 72 consecutive scoreless innings, set between 1907 and 1911, remains an unbroken minor league record.

Irvin Wilhelm was the son of Joseph H. and Celia P. (DeMiller) Wilhelm whose parents had both settled in Wayne County, Ohio from Pennsylvania. He graduated from Wooster High School and played baseball with various town teams in the area. He signed his first professional contract with the Mansfield Kids of the Interstate League in 1895, making his debut alongside teammate Honus Wagner. He walked 11 batters in his first start and left the team during the summer to attend the College of Wooster.

Wilhelm returned to baseball with the 1901 Birmingham Base Ball Club, playing in the first year of the Class B Southern Assosication. He was signed by Birmingham manager Sam Mills on the recommendation of fellow Ohio native and veteran catcher Charley Zimmer. Wilhelm was one of the few bright spots playing for Birmingham over the next two seasons when the team went 45-70 and 39-80. He went 15-18 and 14-9 in his starts those two years and in June 1902 he took over for Frank Haller as player-manager.

Haller went on to work as a scout for the Pittsburgh Pirates and he suggested Wilhelm to owner Barney Dreyfuss, who was trying to fill the huge void left when Jack Chesbro and Jesse Tannehill left the Pirates' rotation for the New York Highlanders. He attended spring training in 1903 and was signed. He married divorcee Louise Ellen Motter from his home town and adopted her son, Avery.

Wilhelm appeared in 12 games for the Pirates in 1903, finishing with a 5–3 record. The highlight of his season was a 4-0 shutout of the Boston Beaneaters on June 4. Despite his solid performance, manager Fred Clarke released Wilhelm in August. Sportswriters speculated that Clarke didn't like the way Wilhelm covered first base and his tendency to issue walks.

The Beaneaters picked up Wilhelm's contract and placed him in the starting rotation of a miserable 51-103 team. He went 3-23 and gave up 122 earned runs, second worst in the league. It may have been during his opening day start against New York at the Polo Grounds on April 14, 1905 that opposing fans took to taunting the pitcher with the nickname "the Kaiser", referring to the hated German emperor, Wilhelm II. In any case, it was during that season that the nickname, which he never liked, became ubiquitous in the press.

After the 1905 season, Boston sold Wilhelm's contract to the Eastern League's Rochester Bronchos and they shipped him back to Birmingham. Wilhelm flourished, going 22-13 with a perfect game against the Montgomery Senators on July 9 as the 1906 Barons won their first Southern Association pennant.

The 1907 club fell to fifth place, but Wilhelm's 23-14 record provided the bright spot, including a 15-inning complete game outing against the Memphis Egyptians on July 15 and back-to-back complete game shutouts in a double-header at home against the Shreveport Pirates to end the season on September 14. Sporting Life reported that, "[i]ncluding eighteen innings on this day, he had gone fifty-nine consecutive innings without allowing a run," breaking a record set earlier that same year Walter Johnson, playing for the Weiser Kids of the Idaho State League1., 2., 3..

The National Commission found, during their spring meetings in 1908, that Birmingham had wrongly pigeonholed Wilhelm's contract throughout the season and awarded him to the Brooklyn Superbas for $1,000. Wilhelm collected $350 and Birmingham got $650, minus a $150 fine, in the resolution. Another controversy came when Wilhelm asked owner Charles Ebbets not to be played on Sundays, but the two apparently resolved the issue amicably.

Wilhelm made his Brooklyn debut on April 17 at Washington Park, claiming a 3-2 win over the Boston Doves. With regular work, he showed durability and control, earning a 1.87 earned run average in 332 innings pitched, including 33 complete games. Despite 16 wins and 6 shutouts, he took 22 losses for the struggling Superbas who finished in 7th place in the National League with a 53-101 record.

Wilhelm pitched a three-hit 13-inning marathon in a pitcher's duel against Red Ames and the New York Giants on Opening Day 1909. He lost his touch during the season, though, and limped to a 3-13 record with a 3.26 ERA. The team finished 6th in the National League with a 55-98 record, their 6th straight losing season.

In 1910 Wilhelm suffered through a bout with typhoid fever. He started just five games that year, going 3-7 with a 4.74 ERA to bring his Brooklyn career to a close at 22-42. The Superbas sold his contract to the Rochester Bronchos, where he helped win their final Eastern League pennant before the team, renamed the "Hustlers", debuted in the newly-formed AA International League. In his three seasons in Rochester, Wilhelm compiled a 48-24 record. While there, the divorced pitcher also married Alice R. Sullivan.

Prior to the 1914 season, Wilhelm returned to the Majors by signing with the Baltimore Terrapins of the newly-founded Federal League. He appeared in 47 games that season, starting 27 and completing 11 for a club that finished in third place. His record was 12-17. After the season, Wilhelm was to be sent to Colonial League under a deal with the Federal League, but he refused to report and was instead used as an umpire for the 1915 season. He sued the Terrapins for violating the terms of his 3-year contract, but the action was mooted when the Federal League folded.

Wilhelm moved on and signed with the Elmira Colonels of the Class B New York State League. In 1916 and 1917 he went 14-19 and 17-16, but then that league also folded. For the next three years, Wilhelm was employed as an airplane assembler for Curtiss in Hammondsport, New York. He continued to pitch in semi-pro leagues and returned to the professional ranks in 1920 with the International League's Jersey City Skeeters, where he befriended team manager Bill Donovan.

Donovan brought Wilhelm with him as a scout and coach when he was hired to manage the Philadelphia Phillies in 1921. After Donovan was dismissed, having been accused of having knowledge of the "Black Sox" scandal, Wilhelm was promoted to manager. Wilhelm's teams fared poorly and he compiled an 83-137 record with Philadelphia before he was fired in late 1922. Wilhelm returned to his home in Rochester, working as scout and coach for the Rochester Tribe. He made his last on-field appearance in 1923. He went on to manage the Class A Bridgeport, Connecticut Bears in 1925. From there he worked as a scout for the Montreal Royals in 1928 and managed the Syracuse Stars of the Class B New York-Penn League in 1929. In 1930 he was hired to coach the baseball team at the University of Rochester.

Wilhelm died in Rochester in 1936 at age fifty-nine and was returned to Wooster, Ohio for burial. He was survived by his second wife, Alice.