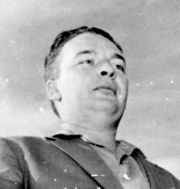 Jesse Benjamin "J. B." Stoner, Jr (born April 13, 1924 in Walker County, Georgia; died April 23, 2005 in La Fayette, Georgia) was a white supremacist ideologue and terrorist. He was one of the bombers of Bethel Baptist Church in 1958 and co-founded the National States Rights Party which was headquartered in Birmingham from 1960 to 1965. He ran for office several times in Georgia and was the NSRP's vice-presidential candidate in 1964. He was convicted of the Bethel bombing in 1980 and served less than four years.

Stoner grew up near Lookout Mountain in northwest Georgia. His father was a successful tour operator, taking buses and railcars up the mountain to the site of the Civil War Battle of Chattanooga. Jesse suffered from polio as a youth and was afflicted throughout his life with a limp. His father died in 1929 and he attended a private prep school but did not graduate. His mother died of cancer in 1941 and Stoner was dismissed from military service because of his limp. As a youth, Stoner's political attitudes were influenced by segregationist Mississippi Senator Theodore Bilbo, whose campaigns he supported.

At 18 years old Stoner re-chartered a dormant Chattanooga klavern of the Associated Klans of America and embarked on a long career of hate-mongering. He strayed from the primarily anti-Black and anti-Communist views of the 1950s Klan and spoke of a Jewish conspiracy to use the federal government to force racial intermarriage. In particular he identified the FBI as "shock troops of integration" and threatened to kill FBI agents.

Stoner founded his own "Stoner Anti-Jewish Party" in 1946 and used it to self-publish a book detailing his views on how the gospel of Christ casts Jews as enemies of God. In 1952 he merged the group into the "Christian Anti-Jewish Party" which he co-founded with Edward Fields. Meanwhile, Stoner graduated from the Atlanta Law School in 1952 and was admitted to the Georgia bar. He took a job as an insurance adjuster, but spent most of his time traveling for his cause. Beginning in the late 1950s Stoner's Confederate Underground claimed credit for a string of bombings aimed at "Communist organizations", including one that failed to detonate at Temple Beth-El in April 1958 and one that damaged Bethel Baptist Church on June 29, 1958. He served as counsel to several segregationists accused of violence. 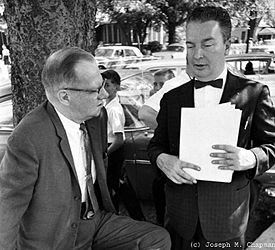 In 1960 he and Fields brought their National States Rights Party headquarters to Birmingham and became actively involved in anti-integration demonstrations and terrorist actions in the area while delivering his message around the country. He and his forces acted outside of the established local KKK groups which operated in collusion with the Birmingham Police Department and were sometimes portrayed as nuisances or even "outside agitators". Bull Connor instructed Stoner that the NSRP was not welcome in Birmingham and did not extend the same immunity from arrest that was available to the Klan members with whom he informally collaborated.

In 1964 Stoner campaigned with John Kaspar as the NSRP's vice-presidential candidate, but received only 6,980 of the 70,600,000 votes cast. He and his uniformed neo-Nazi activists were often seen among mobs of white counter-demonstrators at Civil Rights Movement events, many of which escalated into violence as onlookers clashed among themselves and with police. After the assassination of Martin Luther King, Jr (of which he was briefly a suspect), Stoner represented James Earl Ray during the appeals of his conviction. He was eventually disbarred.

In the 1970s he ran for Governor and Lieutenant Governor and for a U. S. Senate seat in Georgia. In his 1970 gubernatorial campaign he claimed that Adolf Hitler had been "too moderate" toward Jews. In 1972 he won a favorable ruling from the FCC requiring Atlanta television stations to air his Senate campaign ads despite his use of the word "nigger". His nearest brush with victory came in 1974 when he garnered 10% of the vote for Georgia Lieutenant Governor. 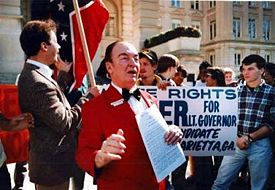 Stoner during his 1990 campaign for Lieutenant Governor of Georgia

Stoner's 1977 indictment for planning the Bethel bombing resulted in a minimal sentence of 10 years, which he evaded for 5 months by going on the lamb, fearing for his life in a racially-integrated prison. He served 3 1/2 years before being paroled for good behavior. He ran again for Lieutenant Governor in 1990, but won only 3% of the vote. He maintained his beliefs until the end of his life, bemoaning the "victory of race-mixing" as a defeat for white people. He was put in a nursing home following a stroke and died there in 2005 while suffering from pneumonia.