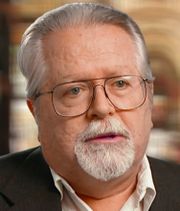 Melton is the son of Burnum and Inez Parker Melton. He grew up in Birmingham and became interested in alternative religions when he came across a copy of Elmer Clark's The Small Sects in America during his senior year in high school. Melton went on to complete a bachelor of arts at Birmingham-Southern College in 1964 and a master of divinity with a concentration in church history at Garrett-Evangelical Theological Seminary in Evanston, Illinois in 1968. After graduating he founded the "Institute for the Study of American Religion" in Evanston and was ordained as an elder in the United Methodist Church.

Melton married Dorothea Dudley in 1966 and had one daughter, Melanie. While completing his Ph.D. in the history and literature of Religions at Northwestern University, Melton was appointed as pastor of the United Methodist Church of Wyanet, Illinois in 1974 and transferred to a Methodist congregation in Evanston the following year. His doctoral dissertation, completed in 1975, surveyed some 800 religious groups practicing in the United States at the time and led to the development of a now widely-used system of classification. While in Illinois, Melton joined the mystical Spiritual Frontiers Fellowship movement. Melton's first marriage ended in divorce in 1979.

Drawing from his doctoral research, Melton complied an exhaustive Encyclopedia of American Religions, which was first published in 1978. The book, which is currently in its ninth edition, has become a standard reference work in the field. His work was important to the establishment of the scholarly field of new religion studies and his expertise has contributed to scholarly debates on the legitimacy of some new religious movements.

In addition to several other books on religious movement, cults and sects, Melton has been a regular contributor to academic journals and reference works, including the Encyclopædia Britannica.

As a leading expert in fringe religious groups and a vocal critic of prevailing theories of "brainwashing" by cult groups, Melton has participated in official proceedings involving members of the Unification Church in California and Aum Shinrikyo in Tokyo, Japan.

Melton moved to Santa Barbara, California in 1985. He continued to lead the Institute for the Study of American Religion as director, but donated the bulk of his research materials to the Davidson Library at the University of California—Santa Barbara. Melton was appointed the Distinguished Professor of American Religious History at the Institute for Studies of Religion at Baylor University in Waco, Texas in 2011. He currently lives there with his second wife, Suzie.

Beside his main academic interest in religious groups, Melton has also researched the history of belief in vampires and their portrayal in popular culture and place in esoteric ritual. Melton has authored or edited several books on vampires and served as president of the American chapter of the "The Transylvanian Society of Dracula".