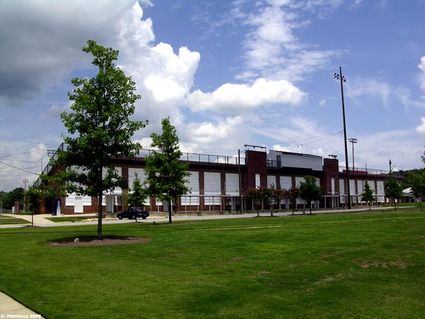 The stadium, located at 401 Parkway Drive in Trussville, hosted its first football game, a 25-6 Huskies victory over Mortimer Jordan High School, on September 16, 1949. The home bleachers and press box ran along the south side of the field, with locker rooms and a band room below. Concession stands were located on the east and west ends of the field, operated by HT Band Boosters. A quarter-mile running track surrounds the playing field. The band bleachers adjoined the main scoreboard behind the east end zone.

Hewitt-Trussville High School moved to a new campus in 1982, but continued to use the stadium next to the former high school, which was converted into Hewitt-Trussville Middle School. New restrooms and locker rooms were added on the north end in 1989, and dedicated to the memory of local resident Steve Hill. New visitors bleachers and a third concession stand were installed on that side of the field in 1996.

The stadium was named in honor of long-time Hewitt-Trussville High School head football coach Jack Wood in 1998. Wood had compiled a 141-73 record as the Huskies' coach, including a trip to the 1992 state championship game. He retired in 2002.

In addition to sports, the stadium hosted Hewitt-Trussville's graduation ceremonies from 1949 to 2014, when 367 seniors walked across the stage on the field. The schools' athletic teams moved to the new Hewitt-Trussville Stadium on Husky Parkway after the October 3, 2014 game against Oak Mountain High School. The stadium was demolished in early 2015 for construction of classrooms at Cahaba Elementary School which is taking over the campus of the original high school.