This article is about the barber and noted plaintiff. For others by that name, see James Armstrong (disambiguation). 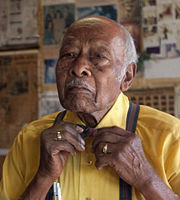 James Armstrong. Still from "The Barber of Birmingham" (2011)

James Armstrong (born 1923 in Dallas County; died November 18, 2009) was a barber and civil rights activist who marched at the head of the 1965 Selma to Montgomery voting rights march.

Armstrong grew up on a Dallas County farm and completed high school. He was drafted into the U. S. Army in 1941 and spent two years in Europe during World War II. He left the army in the late 1940s and moved to College Hills with a GI Bill loan. He opened Armstrong Barber Shop on 8th Avenue North in 1952. Because he was self-employed, Armstrong did not have to fear reprisals from bosses and was free to participate in marches and demonstrations. He often reprised his army duty as standard-bearer, carrying the United States flag. He often cut the hair of visiting black leaders, including Martin Luther King Jr.

In 1960 Armstrong initiated a class-action suit, "Armstrong v. Board of Education of Birmingham, Alabama" after a failed effort to enroll his children at Graymont Elementary School. Two of them, Floyd and Dwight Armstrong, finally enrolled at the school on September 4, 1963 and, after several delays, attended classes on September 10, the first black students admitted to a formerly white school when the system was formally desegregated. The case was appealed to the United States Court of Appeals for the Fifth Circuit and decided in Armstrong's favor on July 12, 1963. 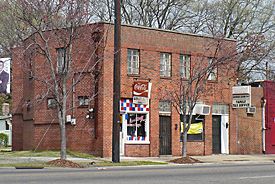 During the Birmingham Campaign of Spring 1963 Armstrong participated in daily protests and was jailed for his attempts to integrate a downtown lunch counter. In 1965 he led marchers across Selma's Edmund Pettus bridge into the hands of police violence that came to be called "Bloody Sunday".

In later life Armstrong served on the board of the Birmingham Civil Rights Institute and marched annually in re-enactments of the Selma march. He died of heart failure in November 2009. His funeral was held at Thirgood Memorial CME Church with burial at Elmwood Cemetery.

Barber was interviewed in 2008 by San Francisco filmmaker Robin Fryday. The resulting documentary film, "The Barber of Birmingham: Foot Soldier of the Civil Rights Movement" premiered at the Sundance Film Festival in Park City, Utah in January 2011 and on PBS in August 2012. It was nominated for an Academy Award for "Best Documentary Short".