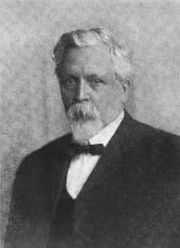 James A. Going (born January 8, 1842 in Pickens County; died December 28, 1910 in Birmingham) was a real estate and insurance salesman who served on the Birmingham Board of Aldermen under mayors Thomas Jeffers and A. O. Lane and served for 23 years as president of the Birmingham Ice Factory.

Going was the second of seven children born to South Carolina natives Eli and Jane Sommerville Going. He was raised in Pickens County and attended the county schools. He was a student-cadet at the University of Alabama when the state seceded and entered the Civil War. He immediately volunteered for the Lane Guards, and by 1862 he was serving as a Corporal in Company D of the 42nd Regiment Alabama Infantry, and raised the colors during the futile battle for Fort Robinette in Corinth, Mississippi in October of that year. He was wounded in that battle and, after six months' leave, with part of the time in the signal service, he returned to active duty as a Lieutenant and fought at Lookout Mountain, Missionary Ridge, Resaca, Stone Mountain, Atlanta, and Benton, North Carolina.

After the war ended in April 1865, Going returned to Pickens County and married the former Myrtis Billups. He operated a farm there until moving to the infant city of Birmingham in November 1872 as a merchant, head of James A. Going & Co.. He soon saw opportunity in the sale of real estate and changed his business in 1879. In 1884 Going kept offices in the Terry Building, but soon relocated to rooms 8 and 11 of the Roden Block in downtown Birmingham. In the sale of insurance policies, Going was associated with John C. Wilson and represented several insurance providers.

Going and his wife had their residence, which also housed boarders, on the northwest corner of 5th Avenue North and 23rd Street. Myrtis Going died in July 1886.

Going was one of the organizers of the Berney National Bank and also served as a member of the People's Savings Bank & Trust Co. and the Birmingham Building & Loan Association. He purchased an interest in the Birmingham Ice Factory in 1887 and served as its president until his death in 1910.

As a respected Alderman, Going was relied upon several times to serve as "acting Mayor" while the Mayor traveled outside the city. He was an active member of 1st Presbyterian Church and took a lead role in seeing to the construction of its present building.

Going and his second wife, Ella, traveled to Michigan in February 1909 for treatment at John H. Kellogg's Battle Creek Sanitarium. Going suffered a stroke in December 1910 and died soon after. He was survived by Ella; three sons, William, Henry and Richard Going, and a daughter. He was buried at Oak Hill Cemetery.