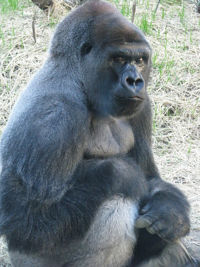 Jamie was the son of Bundera and Huerfanita, gorillas at the Rio Grande Zoo in Albuquerque, both of whom were transfered to the Bronx Zoo in New York before the birth of his only full sibling, Triska. He also had 17 half-siblings.

Jamie came to Birmingham in 1994. Until March 2004 he shared his enclosure with Babec, until tussling between the two males caused damage to Babec's pacemaker. From 2004 until Babec's death in 2008 the two split time on exhibit.

Jamie stopped breathing while anesthetized for a routine electrocardiogram in 2009. Nearly an hour of resuscitative efforts failed to save his life. A necropsy done shortly thereafter was unable to determine the cause of death.