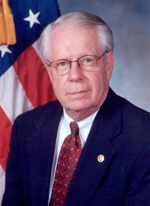 James R. Bennett (born 1940; died August 17, 2016) was Commissioner of the Alabama Department of Labor, Alabama Secretary of State and a State Representative and State Senator. As a founding member of the Alabama Historic Ironworks Commission he helped develop the Tannehill HIstorical State Park around the Tannehill Ironworks and has authored an exhaustive history of industry in Roupes Valley and a general history of Birmingham and Jefferson County.

Bennett was the son of Grover Talmadge and Florence Bernice Olson Bennett of Ft Oglethorpe, Georgia. He graduated from Grundy County High School in Tracy City, Tennessee, and then completed a Bachelor of Science in biology at Jacksonville State University in 1962. He went on to earn a Master of Arts in higher education at the University of Alabama.

In 1978 he took office as a member of the Alabama House of Representatives, representing Homewood. He was re-relected to a second term in 1982 before running for the State Senate in 1983. In 1988 Bennett succeeded in getting his Fair Campaign Practices Act passed, requiring political candidates to disclose their funding sources and expenditures before elections.

He remained in the Alabama Senate through 1993, when he was appointed by Governor Jim Folsom, Jr to fill a vacancy at the head of the Department of State. He won re-election as secretary of state in 1994 and again in 1998, becoming president of the National Association of Secretaries of State in 1999. While he was in the Senate, and continuing in the office of Secretary of State, Bennett wrote several measures to improve voting procedures in Alabama, including the Voter File Maintenance System, Voter Postcard Verification System, and the Absentee Voting Reform Act of 1994. He also helped develop uniform procedures for voter identification and for the issuance and counting of absentee ballots.

As Secretary of State, Bennett, then a Democrat, threw out some 2,000 unwitnessed absentee ballots which were at the heart of a challenge in the 1994 election for Chief Justice of Alabama. Incumbent Democrat Sonny Hornsby narrowly defeated Republican Perry Hooper, Sr. for the seat. The GOP claimed that hundreds of unwitnessed absentee ballots gave Hornsby the edge. Bennett's decision to discount those votes, upheld in the courts, cost Hornsby the election and led to Bennett's switching parties to run as a Republican in 1998.

In 2002, after 25 years of holding elected office, Bennett declined to run for a new position, instead taking the helm of the Citizens Commission for Constitutional Reform, a volunteer effort to coordinate grass roots support for a new Alabama Constitution. He later chaired the Governor's Commission on Constutional Reform under Bob Riley.

In 2003 Riley appointed Bennett to fill the vacancy created when Charles Bishop resigned as Labor Commissioner. He was reappointed state labor commissioner by Governor Robert Bentley in 2011 and retired in 2012. He was then reappointed as Secretary of State, serving from August 2013 to January 2015. He was succeeded by John Merrill.

Bennett serves as chairman of the Board of Trustees for Jacksonville State University. In 2006 he was appointed to the Red Mountain Greenway and Recreational Commission. The Jim Bennett Bridge over U.S. Highway 31 at Brookwood Medical Center is named in his honor.

He and his wife, Andrea, were members of Trinity United Methodist Church in Homewood. Bennett died from cancer in August 2016. He is buried at Maplewood Cemetery in Pulaski, Tennessee. He was survived by his wife; two children, Don and Tara; three grandchildren and one great granddaughter.