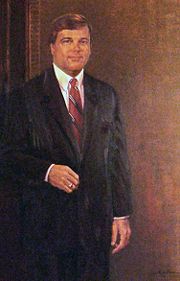 James Elisha "Jim" Folsom Jr, also called "Little Jim" (born May 14, 1949 in Montgomery) was twice elected Lieutenant Governor, in 1990 and 2006. When Guy Hunt was convicted of violated state ethics laws, he assumed the office of Governor of Alabama, serving from 1993 to 1995.

Folsom is the son of former governor Jim Folsom Sr, known popularly as "Big Jim" and grew up in Montgomery and Cullman. He supported himself through college by working at a yarn mill and a post office. He earned a bachelor's degree from Jacksonville State University in 1974 and went to work at the Alabama Department of Industrial Relations. In 1976 he left to become the "southeastern affairs representative" for the Reynolds Aluminum Company.

In 1976 Folsom declared himself a candidate for the primary election to unseat 4th Congressional District of Alabama Representative Tom Bevill after his first term, losing handily. Folsom won his first state-wide office as a candidate for the Alabama Public Service Commission in 1978 and served two terms. In 1980 he defeated one-term incumbent Donald Wilson in a run-off to become the Democratic candidate for the U. S. Senate, but lost to Republican Jeremiah Denton in the 1980 general election.

In 1986 Folsom was elected Lieutenant Governor of Alabama, having survived a run-off with John Teague in the primary and a challenge from Republican Don McGriff in the general election. He was re-elected as the incumbent in 1990 over Republican candidate Bob McKee.

On April 22, 1992 Folsom was sworn in as governor of the state, shortly after the removal of Guy Hunt, who was convicted of violating state ethics laws. Folsom was lauded for creating one of the most diverse cabinets in state history, appointing many women and African Americans to posts in his administration.

Soon later, the state was approached by officials from Mercedes-Benz about the possibility of constructing a first US manufacturing facility in the state. Folsom led recruitment efforts, including an unprecedented $253 million incentive package. He announced, in October 1993, that a site near Vance had been chosen from among potential sites in 30 states for the assembly plant. Critics lambasted the enormous incentives given to the company, but the recruitment has increasingly been seen as a success in opening the door to a thriving automotive manufacturing sector in the state.

In order to polish the global image of the state during the recruitment process, Folsom ordered the removal of the Confederate flag from the dome of the state capitol to a nearby Confederate monument in October 1993.

In the 1994 general election Folsom ran for a full term as governor, but was narrowly defeated by Republican Fob James. Afterward he entered the investment banking business with Raymond James Financial Services' office in Birmingham.

He re-entered state politics as the Democratic nominee for lieutenant governor in 2006, defeating Republican candidate Luther Strange by a slim margin on November 7 to take office in January 2007. He is considered a potential candidate for governor in 2010, where he would likely face Congressman Artur Davis in the Democratic primary.

Folsom is married to the former Marsha Guthrie and resides in Cullman. They have two children, Meghan and James III.