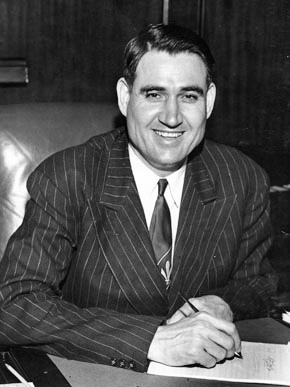 Folsom was the youngest of eight children born to Joshua and Eulala Dunnavant Folsom of Coffee County. After his father died in 1919 he came under the influence of his uncle, Populist Party activist John Dunnavant. Folsom attended classes at the University of Alabama, Howard College, and George Washington University, but never earned a degree. He assisted in relief efforts after the Pea River flooded Elba. In 1936 he married the former Sarah Carnley and had two daughters.

Folsom's first attempts at elected office were unsuccessful. He missed out on serving as a "wet" delegate to Alabama's 1933 prohibition convention. He mounted two failed challenges against Congressman Henry Steagall in 1936 and 1938. In the 1942 Democratic primary for Governor, though, he finished a surprising second to Chauncey Sparks.

After stints in the New Deal Civil Works Administration and the Works Progress Administration, Folsom had found a job as a salesman for his brother-in-law's Emergency Aid Insurance Company in Cullman. He enlisted during World War II, but was discharged due to his height and instead joined the U.S. Merchant Marine. He left the service to care for his daughters after Sarah fell ill, eventually dying in childbirth in 1944. That year, Folsom was elected as a delegate for Henry A. Wallace to the Democratic National Convention in Chicago, Illinois.

Folsom ran again for Governor in 1946 and campaigned against the "Big Mules" with a traveling stage show, brandishing a mop, passing out "suds buckets", and promising to "clean out" the capitol in Montgomery. At 6-foot-8-inches tall, he was nicknamed "Big Jim" and styled himself as the "little man's big friend." He was joined on stage by the "Strawberry Pickers" vocal group.

Folsom outpolled Democratic challengers Leven Ellis, Joe Poole, Elbert Boozer and Gordon Persons in the June primary, and then beat Ellis in the runoff and easily defeated Republican challenger Lyman Ward in the November general election. Folsom's populist platform included promises to call a new constitutional convention, seek reapportionment of legislative districts, appoint voting registrars who would respect the rights of African Americans, expand benefits for senior citizens, raise education funding, repeal of the poll tax and improve state roads and highways. He did manage to secure some funds for schools and the elderly, but his efforts to reform the constitution, expand the electorate and raise revenues were stymied by a conservative legislature. His administration was also plagued by scandals among his appointees, and later a personal scandal.

On March 3, 1948 former Tutwiler Hotel cashier Christine Johnson filed a paternity lawsuit against the widowed Folsom. The suit was settled out of court for an unspecified amount and years later Folsom admitted that he was the boy's father. He married Jamelle Moore in a quiet ceremony on May 5, 1948. They went on to have seven children together, including "Little Jim" Folsom Jr, who assumed office as Alabama's 50th governor in 1993.

In his radio message on December 25, 1949, Folsom stated that, "As long as the Negroes are held down by deprivation and lack of opportunity, the other poor people will be held down alongside them". 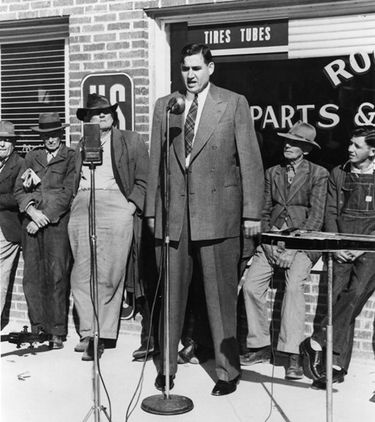 Barred by the state constitution from succeeding himself as Governor, Folsom surrendered the office to Persons in 1951 and returned to the insurance business. He ran again in 1954 and defeated a slate of six other candidates, including Lieutenant Governor James Allen with an outright majority in the June primary. He easily beat Republican Tom Abernathy in the November general election and returned to office in 1955. He was slightly more successful this time in securing funding for public works projects, including a highway bill, a Tennessee-Tombigbee Waterway bill and a program to invest in inland docks. He sought a closer role for industry in leading the state, which caused him to back away from his calls to remove controls on organized labor. His goals for improving the state's unjust treatment of African Americans became impossible to advance in the wake of the Supreme Court's groundbreaking decision in Brown v. Board of Education. Folsom came close to seeing long-delayed reapportionment take place that would have given more legislative power to fast-growing cities such as Birmingham.

In 1958 Folsom commuted a death sentence given to James E. Wilson, a black handyman convicted of taking $1.95 in a robbery. He did not intervene in the case of Jeremiah Reeves, another African American, who was electrocuted that year.

After sitting out John Patterson's term, Folsom mountain a third campaign for governor in the 1962 Democratic primary, but this time he was defeated by George Wallace, his former political protégé. Wallace was successful in painting a portrait of Folsom as weak and corrupted by the system. During the campaign Folsom made a television appearance in which he appeared drunk. He claimed that he may have been drugged, and a physician speculated that the symptoms seen could have been caused by a minor stroke, but Folsom was known as a drinker and his candidacy suffered a large setback.

Folsom ran his last campaign in 1966, facing Ryan de Graffenried, Carl Elliot, John Patterson and Richmond Flowers Sr. De Graffenried, considered the favorite, died early in the campaign and Wallace took advantage of the opening to run his wife, Lurleen as a "stand-in". She was victorious in the primary and easily took office over the challenges of Republican James D. Martin and independent candidate Carl Robinson.

Mrs Wallace died from cancer in 1968 and was succeeded by Lieutenant Governor Albert Brewer. Folsom continued to run, but partly due to the multiplying effects of time and illness, failed to win another elected office. His niece, Cornelia married George Wallace in 1971.

Folsom died of heart failure in 1987, the same year his son was elected Lieutenant Governor.