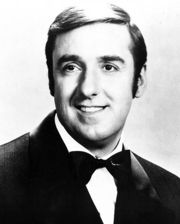 James Thurston Nabors (born June 12, 1930 in Sylacauga; died November 29, 2017 in Hawaii) was an actor, singer, and comedian. He was best known for his portrayal of the good-hearted but naïve Gomer Pyle on The Andy Griffith Show from 1962 to 1964 and its spinoff, Gomer Pyle, U.S.M.C., from 1964 to 1969. Given his goofy demeanor and high-pitched speaking voice on both Andy Griffith and Gomer Pyle, it was surprising to many when he revealed a strong baritone singing voice and turned it into a successful recording career.

Nabors was the son of police offcier Fred Nabors and his wife, Mavis of Sylacauga. He graduated from the University of Alabama with a degree in business administration, where he was involved in acting through fraternity productions. After graduating he moved to New York and took a job as a typist at the United Nations. He later moved to Chattanooga, Tennessee and then to Los Angeles, working as a film cutter for local television stations. While in L.A. he began appearing at a cabaret theater called "The Horn", usually leveraging his thick accent to spin hillbilly tales between songs. It was there that Andy Griffith found him, and recruited him to portray Gomer Pyle on his series.

After Gomer Pyle U.S.M.C. ended its run, Nabors briefly hosted his own variety shows, while also appearing as a popular guest on other shows through the 1960s and 1970s, He was a favorite guest on The Carol Burnett Show and The Muppet Show, and made a couple of guest appearances in the early 1970s on Sesame Street. Carol Burnett considered Nabors her lucky charm, and he was always the first guest on every new season of her show. Burnett and Nabors remained close friends with both owning homes in Hawaii. Comedian Minnie Pearl looked on Nabors as a surrogate son, and he often vacationed with her and her husband.

Nabors received a liver transplant in 1994 after allegedly contracting hepatitis from attempting to shave with a straight razor in India. He continued to perform occasionally, although he preferred to operate his macadamia nut plantation in Hawaii, where he also grew tropical flowers. On January 15, 2013 Nabors married his long-term partner, Stan Cadwallader. The couple met in 1975.

Nabors died at home in November 2017.

Jim got his start in television using his hillbilly skits and operatic singing on The Steve Allen Show, where he became a regular during the final season. He performed in live venues until Andy Griffith saw his act at The Horn in Santa Monica, California, and invited him to audition for The Andy Griffith Show. In 1964, his character was spun off into his own series, Gomer Pyle, U.S.M.C., which ran until 1969. According to producer Aaron Ruben, the show was loosely based on the same premise as No Time for Sergeants, in which Andy Griffith had starred on Broadway years earlier.

Nabors starred with Ruth Buzzi in The Lost Saucer produced by Sid and Marty Krofft which first aired September 6, 1975.

Actor Burt Reynolds used Nabors in a number of his movies during the 1980s, including The Best Little Whorehouse in Texas with Burt Reynolds and Dolly Parton, Stroker Ace with Reynolds and Loni Anderson and a cameo role in "The Cannonball Run II.

From 1997-2006, Nabors starred in A Merry Christmas with Friends and Nabors, a live production at the Hawaii Theatre Center in Honolulu, Hawaii. Produced by Burton White, Nabors completely donated his time and talents in the production which featured, during its run, local and national artists including Karen Keawehawaii, Emma Veary, Jimmy Borges, Frank Delima, Philip Huber & the Huber Marionettes, the Diamond Head Theatre Shooting Stars, Halau Hula O Kawailiula, Hula Hui O Nuuanu YMCA, the Company Singers, and the Hawaii Theatre Orchestra and Honolulu Symphony under the baton of Matt Catingub. The show ran forty performances over a decade and was directed by Tom Hansen until his death in 2006. The final performance run, in 2006, was directed by John Rampage and dedicated to Hansen.

His stage career began as Harold Hill in The Music Man with Florence Henderson at the Burt Reynolds Dinner Theatre.