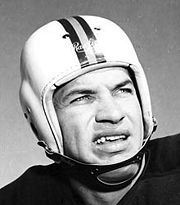 James Edward Pyburn (born November 1, 1932 in Fairfield; died May 21, 2011 in Jasper) was a professional baseball player and football coach. He played three seasons for the Baltimore Orioles between 1955 and 1957 and then spent sixteen years as an assistant coach for the Georgia Bulldogs football team.

Pyburn was a two-sport star at Ensley High School and was recruited to Auburn by Shug Jordan. He was a first-team All-Southeastern Conference end for the 1953 Aubum Tigers football team. catching 23 passes for 379 yards and two touchdowns in his sophomore season. He was named an All-American in junior season, with a school-record 28 catches for 460 yards and two more scores. He was drafted in the 18th round of the 1956 NFL draft by the Washington Redskins, but did not sign.

Pyburn also starred for the Auburn Tigers baseball team, leading the SEC in batting average with .432 in his junior year. He signed as a free agent with the Orioles in 1955, eaming a $48,000 signing bonus. Under the "Bonus Rule" instituted in 1947 the Orioles could not assign him to a farm club, denying him the chance to learn to hit professional pitching. Over the next three years he appeared in 158 games, with 294 at bats. He only hit .190 with 20 runs batted in and 34 walks.

After ending his playing career he coached football at Columbus High School in Columbus, Georgia. He joined the Auburn football coaching staff, but soon left to be part of former teammate Vince Dooley's Georgia staff. His son, Jeff, quarterbacked the Bulldogs from in the late 1970s.

Pyburn was inducted into the Alabama Sports Hall of Fame in 2000. He suffered from Alzheimer’s Disease later in life. He died in Jasper in 2011 after a long illness. He was survived by his wife, Ann; two sons, Heff and Matthew; and three grandchildren. He is buried at Elmwood Cemetery.