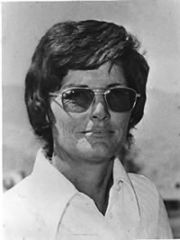 Jo Ann Prentice (born February 9, 1933 in Birmingham) is a former professional golfer with six wins on the Ladies' Professional Golfers Association {LPGA) tour between 1965 and 1974.

Prentice took up golf because her three brothers all played. She won the 1954 Alabama women's amateur golf title and was a quarterfinalist in that year's U.S. Amateur competition. She became a professional in 1956 and reached a second-place tie in the 1962 U.S. Women's Open.