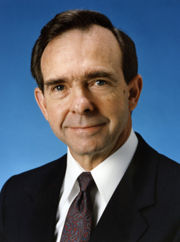 Joab Langston Thomas (born February 14, 1933 in Holt; died March 3, 2014 in Tuscaloosa) was a botanist and president of the University of Alabama from 1981 to 1988. It was during his term that legendary Crimson Tide football coach Paul "Bear" Bryant retired.

Thomas, the son of Ralph Cage and Chamintney Stovall Thomas, grew up in Russellville, where his father was superintendent of education and his mother taught music. He played football in high school, but turned down athletic scholarships to enroll with a full academic scholarship at Harvard University. He went on to earn his bachelor of science in 1955 and a master of science in 1957. He remained at Harvard to complete a Ph.D on Cyrillaceae, a genus of flowering shrubs in 1959. Afterward he remained on campus for two years as a teaching fellow and cytotaxonomy researcher at the Arnold Arboretum.

Prompted by his father's illness, Thomas returned to Alabama as an assistant professor of Biology at the University of Alabama in 1961. He was promoted to full professor in 1966, appointed Dean of Student Development in 1969, and Vice President for Student Affairs in 1974.

Thomas left to become chancellor of North Carolina State University in 1976. WHile there he oversaw the establishment of a School of Veterinary Medicine and increased enrollment at the University past 20,000 students. He returned to the University of Alabama as president in 1981. His primary focus was on increasing the academic stature of the university. He led a private fund-raising campaign that brought in $62 million to help triple research funding while also raising standards for admission and curicula, and working to improve relations with the Alabama State Legislature.

Thomas hired Ray Perkins to succeed Paul Bryant as coach of the football team in 1983, and also hired Bill Curry to take over the team when Perkins left in 1987. Thomas resigned from the presidency in 1988. In 1990 he was named president of Pennsylvania State University and served five years there before retiring to Tuscaloosa. While in College Station, Thomas threatened publicly to resign if legendary Penn State coach Joe Paterno were to retire during his tenure, saying that "You can't ask one man to replace both Bear Bryant and Joe Paterno."

Thomas married the former Marly Allene Dukes of Boise, Idaho on December 22, 1954. They had four children: Catherine, David, Jennifer. and Frances. He died in March 2014 at the Hospice of West Alabama in Tuscaloosa. He was survived by his wife, children, and 13 grandchildren.