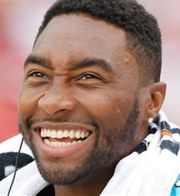 Joseph Webb III (born November 14, 1986 in Birmingham) is a former football star for Wenonah High School and the UAB Blazers. He was selected by the Minnesota Vikings in the 6th round of the 2010 NFL Draft.

Webb, son of Joseph and Wanda Webb, played for Ronald Cheatham at Wenonah High School. He set a school record by passing for 415 yards and four touchdowns in one game and was named honorable mention Class 5A all star by The Birmingham News. He also played on the Dragons basketball and baseball teams and was a member of the National Honor Society.

Webb went on to play collegiately for UAB. He was redshirted for the 2005 season. He came into the 11th game of the 2006 season and started the final two games, including a 33-51, 426-yard performance against South Florida.

During the 2007 season, Webb was used most often as a wide receiver. He racked up 459 yards and scored three touchdowns on 30 receptions.

Webb ended his UAB career with 5,771 yards passing and 2,774 yards rushing, for a total of 8,545 yards from scrimmage and 65 touchdowns (27 passing, 24 rushing, and 4 receiving). He graduated from UAB with a degree in criminal justice.

Though he was not invited to the 2010 NFL scouting combine, Webb posted impressive scores at UAB's pro day. The Vikings made him the 199th overall selection in the 2010 NFL draft. He initially expected to play wide receiver. He was activated for the December 5, 2010 game against Buffalo, returning the opening kickoff for 30 yards and lining up at wide receiver. The Vikings starting quarterback Brett Favre was injured during that game, and the next week saw Tavaris Jackson starting in a game that had to be relocated to Detroit due to the Metrodome's roof collapse.

Jackson played most of that game against the New York Giants but sustained a toe injury. Webb was slated to start as the Vikings' quarterback against the Chicago Bears during the December 20 Monday Night Football game, played outside in Minneapolis at TCF Bank Stadium, but Favre, whose 297-consecutive game streak was broken the week before, decided to start instead. Favre was sacked and sustained a head injury in the 2nd quarter, leading the way for Webb to take over. Webb ran for his first professional touchdown and completed 15 of 26 passes for 129 yards. He had one fumble, two interceptions and three sacks during the 40-17 loss to the Bears. Webb finally started as quarterback the next week against the Eagles, which had to be moved to Tuesday December 28 due to blizzard conditions in Philadelphia.

In 2011 Webb played as a backup to starter Christian Ponder, and was brought in for special "blazer package" plays where his running skills were important. He took over when Ponder was benched in week 14 against Detroit and he came close to overcoming the Vikings' 31–14 deficit, but fumbled his last snap of the game. On a Christmas Eve game against Washington he came in after Ponder suffered a concussion and went 4-of-5 for 84 yards and two touchdowns passing and added another score on the ground to post a 33–26 win on the road.

Webb did not play in 2012 until Ponder's elbow injury kept him out of the wild card game against Green Bay. Webb went 11 for 30 attempts for 180 yards and one touchdown in the loss. Minnesota signed quarterback Matt Cassell in March 2013 and Webb was notified that the team planned to move him back to wide receiver. After the season, in which he recorded five catches for 33 yards, he signed a free agent contract with the Carolina Panthers.

In 2014 and 2015 Webb was used primarily as a kick returner, although he practiced as a third-string quarterback as well. He returned kicks on the Panthers team that lost to the Denver Broncos in Super Bowl 50. Carolina released him on September 2, 2017.

He was signed as a special teams player and backup quarterback for the Buffalo Bills for the 2017 season. He stepped in to replace Nathan Peterman following an injury on December 10 and completed the game which the Bills won 13-7 in overtime.