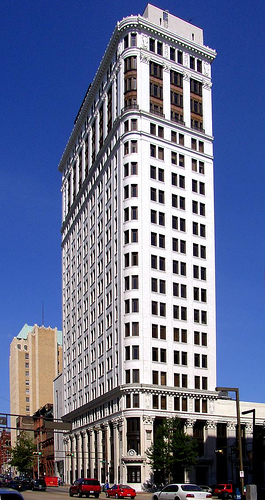 Photo from the northwest across 1st Avenue North. 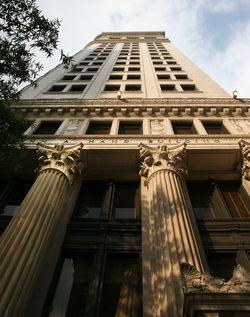 Architectural details on the side of the John A. Hand building

The building is located on the southeast corner of 20th Street and 1st Avenue North. When it was built it was the tallest building in Alabama for a year before being surpassed by the City Federal Building. The architect was William Leslie Welton with the New York firm of Mowbray and Uffinger. The builder was Houston Brice, Sr, who was then working for the Fred A. Jones Building Company, and who later founded Brice Building Company. Several 19th century buildings, including the Alabama National Bank Building and the western half of the McAdory Building were demolished to make way for the project.

The base and upper section of the building are accented with metal window spandrels, giving the limestone sections between them the appearance of tall pilasters. Originally a pair of doors opened below the monumental pediment and clock face in the curved section at the corner, which is now a window. The interior features Sylacauga marble and elaborate metal railings at the stairs.

The four early Twentieth century skyscrapers at 20th Street and 1st Avenue were billed, at the time, as the "Heaviest Corner in the South." Over the years, that claim was inflated to the improbable "Heaviest Corner on Earth", which remains a popular name for the grouping. In 1930, American Trust and Savings Bank merged with First National Bank of Birmingham, which was renamed AmSouth in 1972. The combined bank made the John A. Hand Building its headquarters in 1940, thoroughly remodeling the first three floors in modern style.

A Britling Cafeteria was housed in the building in the early 1960s. From 1968 until 1994, Sol's Sandwich Shop was located on the bottom floor of the building.

In 1997 the John A. Hand building was purchased at auction for $1.5 million by Jimmy Taylor who began a multi-million dollar restoration for his startup The Bank (formerly Warrior Savings Bank, now Cadence Bank). The upper floors were converted into luxury apartments, including one on the 19th floor for the Taylors themselves, who relocated from Shoal Creek, and another for Charles Barkley. The Downtown Athletic Club occupies a floor, and some space in the lower floors not used by the bank are leased as private offices. A fitness center is located in the basement. The original banking lobby and vault were carefully restored according to the architects' original plans, using the same Sylacauga marble. McCrory Building Company was the general contractor for the multi-phase restoration. The 11th floor was the best preserved, with original woodwork and fixtures, and served as a model for work on other floors.

In support of the renovation, the City of Birmingham financed a new $4.5 million parking deck across Morris Avenue, which is now spanned by a pedestrian bridge. The building is managed by Corporate Realty and residential units are marketed by RealtySouth. Superior Bank, which was run by CEO C. Stanley Bailey, considered selling the building, but planned to remain as a tenant.

When Superior was seized by the FDIC and sold to Community Bancorp LLC of Houston, Texas, the FDIC retained ownership of the building. The newly-formed Cadence Bank was headquartered there as a tenant until November 2012, when it relocated its corporate offices to the nearby One Concord Center. Cadence completely vacated the building by 2013.

The FDIC eventually sold off its stake in the John Hand Building, with the lower 6 floors and basement being sold in January 2014 to Bill Smith of Insight Card Services. Smith launched his same day delivery startup Shipt on the building's 6th floor in late 2014, quickly expanding its offices to several other floors as the company grew. Shipt's "UFO" logo was added to the top of the building in 2016. Smith and other investors refurbished the former Athletic Club as the "John Hand Club" to host corporate and private events.

In 2021 Smith announced that his second start-up, Landing, would relocate its headquarters offices from San Francisco to the John Hand Building. The Shipt signage at the top of the building was replaced in January 2022.