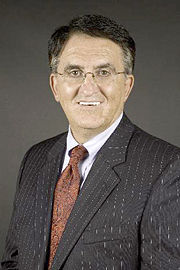 John E. Amari (born August 7, 1948 in Roebuck) is an attorney and judge for the 10th Judicial Circuit of Alabama. He was formerly an Alabama state representative and served four terms in the Alabama State Senate, representing District 15.

Amari is one of six children born to Joe and Mae Amari and raised on their produce farm. He helped to operate their Huffman Curb Market as a boy and graduated from Banks High School.

Amari holds a bachelor's degree from the University of Montevallo and a law degree from Samford University's Cumberland School of Law.

Amari was elected to the Alabama House of Representatives to represent Alabama House District 34 in 1978, and then to the state senate, representing District 12 four years later. In 1983 he won a special election for the newly-recreated District 15. He left the senate in 1998 to run for Lieutenant Governor, but lost a close race to Steve Windom, and failed to regain his senate seat from Steve French in the 2002 primary. In 2006 Amari ran unsuccessfully for Alabama Public Service Commission. In 2008 he defeated Republican Norman Winston to become a district court judge.

Amari and his wife, the former Terri Parker, have five children.