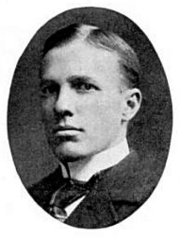 John C. Forney (born November 23, 1873 in Jacksonville, Calhoun County; died 1957) was an attorney and member of the Birmingham Board of Aldermen.

Forney was the son of William H., a Confederate general and Congressman, and Mary Woodward Forney. He earned his bachelor and master of arts at the University of Alabama and a bachelor of laws from the University of Alabama School of Law in 1894. He came to Birmingham to practice and counted the Alabama Southern Mining Company, Aldrich Mining Company, Birmingham District Coal, Light & Power Company and American Bridge Company among his clients.

Forney married Anne Bonholzer, daughter of Swiss immigrants, in 1900 and had two daughters, Annie and Katherine. He was elected to the Board of Aldermen in 1905 and re-elected in 1907.