John Carroll Catholic High School is a private high school located at 300 Lakeshore Parkway in Birmingham. The school's motto is "Pro Deo et Patria," meaning "For God and Country." Enrollment in 2005 was approximately 650 students. The principal is Father Robert Sullivan. 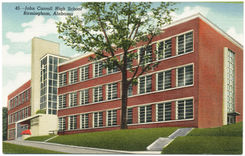 When Archbishop Thomas J. Toolen was assigned to the former Mobile-Birmingham Diocese in 1927, he sought to establish Catholic high school in Birmingham. At a testimonial dinner for Archbishop Toolen, John Carroll started The Friends of Catholic Education to raise funds to do so. The school was named after Carroll in recognition of his leadership and dedication to the project.

The original campus was built on Highland Avenue, just east of where the Red Mountain Expressway would eventually be built. Construction, estimated at $250,000, was begun in November 1946. The school opened for students on September 8, 1947. Additional facilities were added through the 1950s.

In the late 1950s, the school obtained land on Montclair Road, across from the future site of Trinity Medical Center, for their athletic facilities including a football field. These facilities were completed in 1961.

Bishop Raymond Boland held a press conference on December 9, 1989 to announce plans to build a new facility for John Carroll Catholic High School next to the Wildwood development on Lakeshore Parkway. Although most of Wildwood is in Homewood, the new John Carroll facility is just within the Birmingham city limits. Construction began on April 8, 1990 and the new school opened in August 1992. The new campus includes athletic facilities on-site.

The original school buildings on Highland Avenue were demolished in 1996. The Catholic Diocese of Birmingham sold the 7.5-acre property to Bayer Properties, Inc. in 1997 for $2.1 million. Bayer then built The Crescent office building, which opened in August 1999, on a portion of the property. A housing development called Highland Crescent was later built on the area of the site closest to Highland Avenue.

John Carroll's school colors are kelly green and white. Athletic teams are known as the Cavaliers. The school is a member of the Alabama High School Athletic Association and currently competes in the 5A division. The football team won the state championship in division 3A (then the second-highest division) in 1973.