This article is about the Lakeshore Foundation CEO. For others with similar names, see John Kemp. 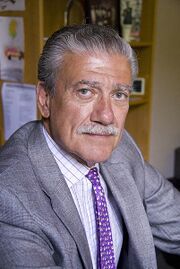 John D. Kemp (born 1949 in Bismarck, North Dakota) is an attorney, a disability rights activist, and the president and CEO of the Lakeshore Foundation, having been recruited to succeed Jeff Underwood following his retirement in 2021.

Kemp was born with a congenital absence of portions of all four extremities, with his limbs ending just beyond the elbows and knees. He was fitted with prosthetic limbs and was able to fully participate in school, sports, and Boy Scouts. He also operated a newspaper route and worked as a caddy at the Apple Creek Country Club. In 1960 he was selected as Easter Seals Child of the Year and appeared along with First Lady Mamie Eisenhower as the national ambassador for the program.

Kemp's family moved to Frankfort, Kentucky during his teen years. He completed high school with seven varsity letters for sports. He earned a bachelor of arts in history from Georgetown University in Washington D.C. in 1971 and graduated from the Washburn University School of Law in Topeka, Kansas in 1974. From 1982 to 1990 he served as general counsel and vice president of development for Easter Seals. In 1995 he was named president and CEO of the Washington D.C.-based VSA Arts and also co-founded the American Association of People with Disabilities (AADP) with Paul Hearne.

In 2001 he became a partner in the firm of Powers Pyles Sutter & Verville, developing their legislative and lobbying practice while also service as CEO of the American Congress of Community Supports and Employment Services (ACCSES.) In 2007 he added the titles of executive director and general counsel for the U.S. Business Leadership Network.

Kemp was hired as the fourth president and CEO of the Albertson, New York-based Viscardi Center, which works to educate and employ of people with disabilities, in 2011. He also chairs Viscardi's "Project Accessible Oral Health".

Kemp was presented with the Henry B. Betts Award from the AADP in 2006, the Dole Leadership Prize from the Robert J. Dole Institute of Politics at the University of Kansas in 2014, and a lifetime achievement award from the Washburn University School of Law in 2017.