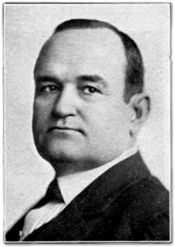 Miller and his twin sister Sallie were born to John and Sarah Pressly Miller at Oak Hill in Wilcox County in 1858. He earned his undergraduate degrees at Erskine College in Due West, South Carolina. The year after his graduation he was appointed Chair of Mathematics for the college and held the position for seven years.

Miller pursued post-graduate studies in law at the University of Virginia with a special course at Johns Hopkins University in Baltimore, Maryland. He began his law practice in Birmingham in 1888 and built a successful practice. He accepted the position of City Recorder from 1891-92 and married the former Eugenia Alexander on June 10, 1896. Their only child, a boy named Pressly, died in infancy.

Miller was appointed to the Circuit Court of Jefferson County in 1907 and was elected to Birmingham's City Court in 1912. In 1915 he was elected to the bench of the 10th Judicial District of Alabama.

Miller was active in the Knights of Pythias, the Knights of Honor and the Presbyterian Church. He served on several corporate boards and was a generous supporter of Erskine College's Euphemian Literary Society, helping to fund a new building for the group in 1912.

Miller died in January 1919 and is buried in Birmingham.