From Bhamwiki
(Redirected from John Johns)
Jump to: navigation, search 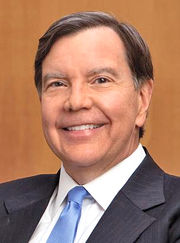 John D. "Johnny" Johns (born February 8, 1952 in Gadsden) was the former CEO of Protective Life Corporation and chair of the Birmingham Business Alliance.

Johns is the son of J. D. and Margaret Griffin Johns. He graduated with honors from the University of Alabama in 1974, having been president of Kappa Alpha and the Jasons Honor Society. He went on to earn a juris doctorate and masters in business administration at Harvard University in 1978. He returned to Alabama and joined the Birmingham firm of Cabaniss, Johnston, Gardner, Dumas & O'Neal and was made a partner in 1984. He left the same year to become a founding partner of Maynard Cooper & Gale until 1988, when he accepted the job of vice president and general counsel for Sonat, Inc..

Johns left Sonat to join Protective Life as vice president and CFO in 1993. He was made president and COO in 1996 and chief executive officer in 2002. In 2003 he also became chairman of the board. During his tenure as president, Johns saw Protective's net income increase from $103 to $302 million and assets grow from $19 billion to $57 billion.

Johns serves on the executive committees of the Financial Services Roundtable and the American Council of Life Insurance. He has also served on the boards of the Altamont School, Birmingham-Southern College, the Birmingham Museum of Art, the Birmingham Civil Rights Institute, and the University of Alabama. He has chaired the Birmingham Business Alliance, the Business Council of Alabama, and the Central Alabama Council of the Boy Scouts of America. He also served on numerous advisory boards, including the Community Foundation of Greater Birmingham, the Economic Development Partnership of Alabama, Leadership Alabama, Regions 2020, the United Negro College Fund and the McWane Foundation. He is also chair of the Campaign for UAB.

In July 2017, Johns transitioned from the role of CEO to Executive Chairman at Protective Life Corporation.

Johns and his wife, Nancy, have two children, Anna and Dixon.

He was inducted into the Alabama Academy of Honor in 2013 and the Alabama Business Hall of Fame in 2017.