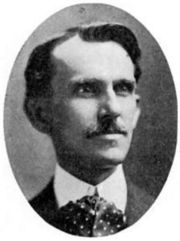 John McQueen before his death in 1921

McQueen was the son of South Carolina congressman John McQueen and his second wife, the former Sarah Pickens. The family lost their home in the Civil War and the elder McQueen succumbed to apoplexy in 1869. Sarah brought her children to Eutaw, in Greene County, Alabama the following year.

John McQueen attended public schools and then earned a bachelor of laws at the University of Alabama in 1883. He partnered with S. H. Sprott and John Altman in Livingston, but was soon hired away as solicitor for Walker County. After a year and a half he left that job to form a partnership with G. W. Hewitt in Jasper. Hewitt, who had served in the 45th United States Congress until 1879 was returned to Washington in the 1884 general election. McQueen moved his practice to Birmingham in 1890 and partnered again with Altman.

McQueen was elected to represent Jefferson County in the Alabama State Legislature in 1892. He also served in that capacity in 1894-95 and 1897-98 and was made Speaker of the House for one term.

In 1898 McQueen accepted an appointment to serve as assistant prosecutor for Jefferson County. In 1901 he visited Montgomery as a guest of Alabama Supreme Court Justice Thomas McClellan. During the visit he proposed to his longtime sweetheart, Caroline Beale, against the wishes of her father. Undeterred, the couple appeared at the home of a Justice of the Peace to be married, but, knowing Mr Beale's objections, he declined and informed her parents. Mr Beale, incensed, appeared at the home of Justice McClellan to confront McQueen. They argued and Beale produced a handgun and proceeded to fire at McQueen, missing him each time. McClellan was struck in the shoulder, but recovered. While her father was held in jail, John and Caroline were married by Reverend Edward Cobbs.

Soon after marrying, McQueen resigned from office to return to private practice. In 1904 he won the Democratic nomination for solicitor for the 10th Judicial Circuit of Alabama and served two six-year terms. In 1915 he began serving as Judge for the Jefferson County Municipal Court.

McQueen was an early promoter of the Southern League and owned the Birmingham Barons during their pennant-winning 1892 season. He was also a founder of the Choctaw Bend Hunting & Fishing Club and one of the founders of the Southern Club. He was also a Royal Arch Mason and Knight of Pythias. His brother, James, was president of the Sloss-Sheffield Steel & Iron Company and a later owner of the Barons.

McQueen died in 1921 and is buried near his mother and brothers in Mesopotamia Cemetery in Greene County.