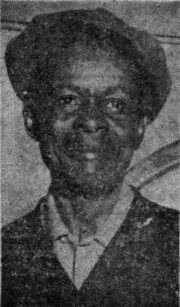 John Todd (born December 8, 1891 in Hackneyville, Tallapoosa County; died May 6, 1967 in Birmingham) was the keeper and companion of the Avondale Park Zoo's star, Miss Fancy the elephant.

Todd was the son of Louis and Emma Thomas Todd of Tallapoosa County. He came with his family to Birmingham around 1915 and worked for the Birmingham Department of Parks and Recreation at the city greenhouse on Green Springs Road. He and Dayton Allen were employed at the small zoo in Avondale Park in 1913, when the city took possession of its first elephant. Allen and Todd were trained in how to care for Miss Fancy by Hagenbeck-Wallace Circus trainer Curly Hayes. The training included the use of an elephant hook and a series of "Short Indian" command words which Miss Fancy had been trained to obey.

When Allen resigned, Todd, nicknamed "Cheerful", became the full-time elephant keeper. He was believed to be the only African-American elephant keeper in the country. He was paid a wage which peaked at $24 per week and reportedly turned down offers from a circus to travel with them at twice the pay.

He was responsible for feeding Miss Fancy, washing her, mucking out her pen, exercising her daily, and keeping her toenails and tusks trimmed. For exercise, he would often take her on 5- to 10-mile walks through nearby neighborhoods, either leading her or riding on her back. Often he brought her to African-American neighborhoods, visiting family and friends and giving children who were not admitted to the zoo a chance to meet her.

The two developed a close bond and Todd was often called back during his vacation weeks to settle her nerves. Their relationship was tested when Todd was drafted into the U.S. Army for service in World War I. He was inducted in Birmingham on July 31, 1918 and underwent basic training at Camp Sheridan in Montgomery. He traveled to France with Company D-326, Quartermaster Corps in October 1918 and returned on July 1, 1919. He was honorably discharged on July 10. During Todd's absence Miss Fancy lost significant weight. As soon as he returned, she greeted him with cheerful trumpeting.

Todd characterized Miss Fancy as gentle, but willful. He appealed to her sense of justice by "never [using] the hook unless she has done wrong, and knows that she has done wrong." During her semi-annual "period of madness", Todd remained with her around the clock and restrained her with chains when necessary. On the few occasions when Miss Fancy escaped from her pen, Todd usually found her exploring the neighborhood and easily coaxed her home with food.

Todd administered Miss Fancy's occasional doses of castor oil or other medicines for chills or constipation. They were mixed, at the veterinarians' suggestions, with a quart of liquor, and diluted with a few gallons of water. Since Miss Fancy's tenure in Birmingham coincided with prohibition, the liquor was provided by the Birmingham City Commission from confiscated stocks.

Some of the "Shelby corn" was shared with Todd, "as he was her very best friend". One afternoon in early 1934, Todd was said to be under the influence when he clambered onto Miss Fancy's back for a ride to the predominantly Black Taylor Hill community just east of Avondale Park. Along the way, a crowd gathered and Todd began having Miss Fancy perform her stunts. A resident reported to police that they were blocking traffic.

Officers V. W. Gore and W. H. Fulghum responded to the call. They determined that Todd was "too high" to be piloting an elephant, and attempted to carry him away in their patrol car, expecting Miss Fancy to follow. She objected to the arrangement and turned to go the other direction. The officers changed their approach and allowed Todd to be carried back to the zoo on Miss Fancy's back. After he put her to bed for the night, Todd was arrested and spent the night in jail. Todd recalled that the judge at the Recorder's Court accepted the testimony of his own sons, who had observed Todd immediately before the incident and didn't think him drunk. Todd was freed without a fine.

Unable to meet the expenses of maintaining an animal collection during the Great Depression, Miss Fancy was sold to the Cole Brothers - Clyde Beatty Circus in November 1934. Todd continued to work for the Department of Parks and Recreation as a night watchmen and Legion Field and back at the city greenhouse. In a January 1954 interview with Birmingham Post-Herald columnist Bill Mobley Todd expressed interest in the opening of the new Birmingham Zoo at Lane Park and also expressed regret that he had not been able to save enough money to visit Miss Fancy in her last home in Buffalo, New York. He retired in 1959 and was honored by the city for his decades of service.

In retirement, Todd continued to care for his father and other family members. He died in 1967 and is buried at Shadow Lawn Cemetery in Mason City.